Man, motorsport does my head in. On the one hand, you’ll have people eulogizing about the rose-tinted good old days when everyone just stoically carried on the Grand Prix while their peers burned to death in their cars around them. Then, on the other hand, somehow we’re into, like, week three of a new phase of the culture war in which people ask: did Megan Thee Stallion diss Martin Brundle?

Martin Brundle is an ex-Formula 1 driver, now turned Sky Sports presenter. I’m old as hell so I can remember him racing (fondly, he was one of those drivers who never quite had a good enough car and was charmingly scrappy with it) and I’ve got a lot of respect for the guy. But frankly, if you don’t live on Weirdo Nostalgia Island where he’s one of the sportspeople deemed a national treasure, then you couldn’t be blamed for not knowing who he is. He retired from F1 before eight drivers on the current grid were even born, including title-leader Max Verstappen. 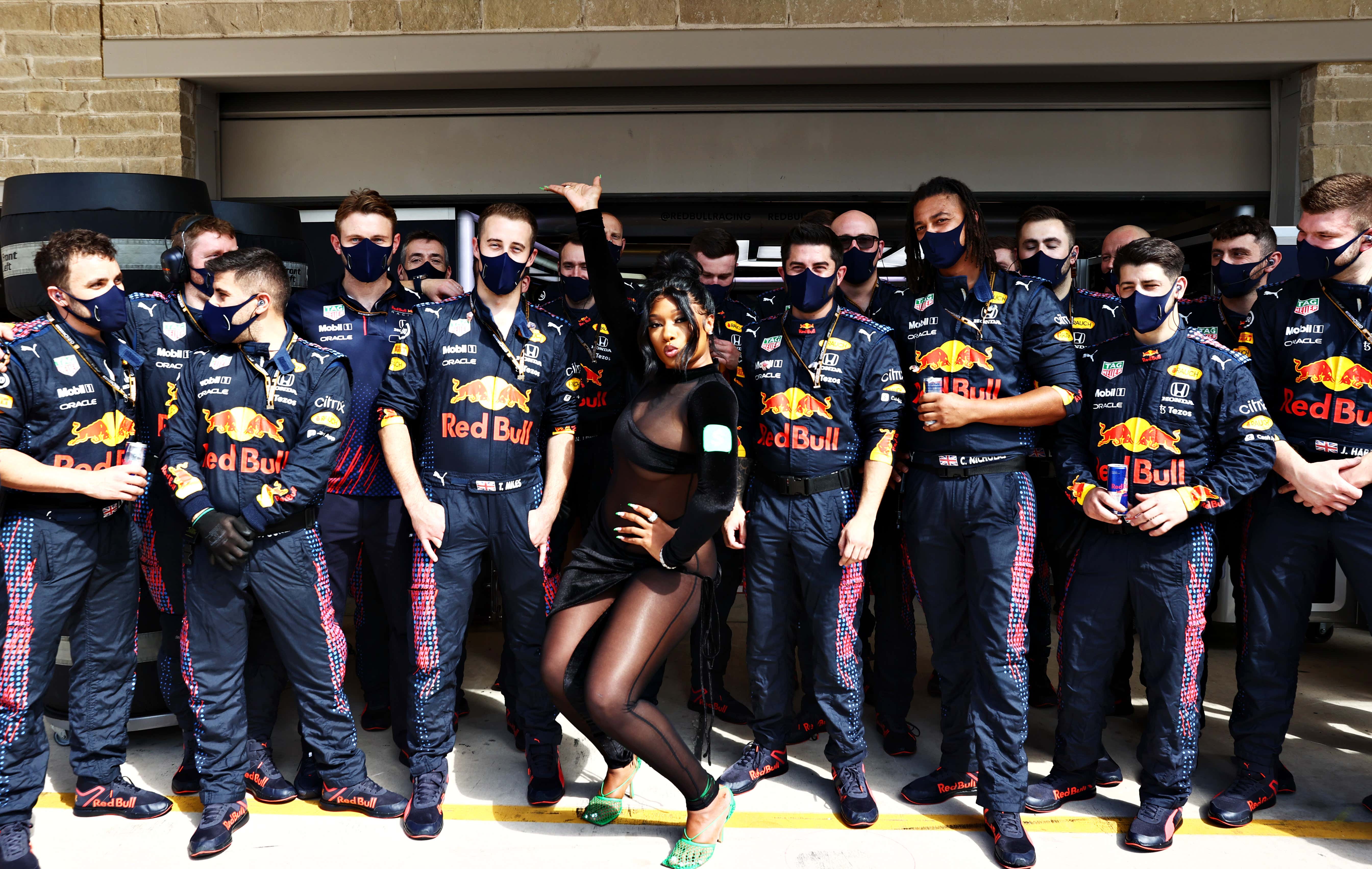 Not knowing who Megan Thee Stallion is would just be embarrassing, however.

So was it surprising when he came up to ask Megan Thee Stallion to do an impromptu rap about F1 on the grid, that her security went “you know what, maybe this isn’t ideal” and shut down what looked like some old dude asking her weird things? No. Megan was there with Red Bull as they share a partner (Cash App) and it’s not like anyone tunes in to the F1 grid walk for the in-depth celebrity insights. At least, if that’s what you’re there for, then this might be a rare instance in which I gatekeep both celebrity stanning and F1.

I should add here, before I really get into this, that Brundle took the whole thing well and didn’t seem at all pressed himself. His grid walks are legendarily awkward and usually involve him trying to identify a celeb (he did know who Megan Thee Stallion was) and then getting rejected for an interview with them. It’s happened with everyone from Hollywood stars to sports personalities and, for viewers, it’s kind of part of the tradition and charm.

That didn’t stop every fragile man on the internet coming out of the woodwork to cape for the huge insult that had been grievously inflicted on him by getting turned away by a security guard. Y’know, like you after your third margarita on half-price Wednesdays; we’ve all had it happen.

Jokes aside, sometimes interviews go wrong. Sometimes people don’t speak to you. Sometimes they’re monosyllabic or uncooperative—especially on a race grid, this is not a new experience or anything egregious. Sometimes PRs shut you down or you get blanked entirely or whatever. I dunno, getting snubbed in motorsport is nothing new for most of us, it just is, as the drivers repeat often, what it is.

According to Sky F1 U.K.’s coverage over the Mexico City Grand Prix, however, there’s been a rule change that means celebrities are not allowed to bring bodyguards onto the grid in case they hurt anyone’s feelie-weelies. In the world of ever-shifting F1 regulations, that’s right up there with sprint qualifying in terms of “things anyone needed.”

During the broadcast, Brundle described the new rule and said “It must be the ‘Brundle clause.’ I sort of like it if they ignore me, to be honest.” He added that he likes to “call out some of the celebs” who he thinks would be “using the grid a little bit,” saying he believed “they don’t really have a passion.”

I don’t really wanna get into who’s a real fan here but in marketing terms, of course, it’s actually F1 using the celebs in order to get publicity and attention on the sport from celebrities’ fanbases. WAP, the seminal (or maybe vaginal) anthem that Meg appeared on with Cardi B, has had 427 million views on YouTube, whereas F1 gets about 87.4 million people tuning in per Grand Prix.

Brundle said he liked to poke the celebs because he felt he was representing F1 fans. “I know there are millions of fans at home going ‘I should be on that grid. I’m a massive Formula 1 fan, not them.'” Then he incorrectly recounted being ignored by Megan, who actually was perfectly polite to him until her “man mountain” security guard intervened.

“I put out a simple tweet about it and got five million impressions,” boasted Brundle. “I don’t understand any of that, to be honest.” Which is fair, because no sane person does—it’s just that we’ve reached such an advanced stage of discourse that this spun into think pieces about respect and the vomit-inducing concept of who deserves to be at the world’s most expensive motorsport spectacle for a fortnight. And it’s still going on.

After videos have gone ’round social media today of Charles Leclerc and Lando Norris getting mobbed like boyband members at Sao Paulo airport, it’s fair to say that women F1 fans aren’t exactly doing themselves any favors in terms of looking like they understand boundaries. But to be honest, as a woman who’s frequently in paddocks, I’d be delighted to have someone following me around telling people they couldn’t speak to me. It’ll be fascinating to find out if, say, Mohammed Bin Salman is subjected to the same rules if he takes to the grid in Saudi Arabia or, perhaps, in that instance, interviewers will have to show a bit of respect the other way.

Got absolutely unreasonable F1 views? Of course you do. Send them to [email protected]