Rimac, the Croatia-based electric hypercar maker, has finally unveiled the production version of the C_Two. The production is called the Nevera, named for the storms that occasionally pound the Croatian coast. The car starts at $2.4 million.

“This is it. This is the car I had in mind when I embarked on the impossible journey ten years ago,” said company founder and CEO Mate Rimac. “All our hard work has resulted in the Nevera – our record-breaking hypercar. This car was born to outperform, and to raise the bar, redefining the norm for performance cars. And not only in performance – but as an all-around package.”

“When we first revealed the C_Two, we set our targets extremely high. There was nothing else that could even come close to matching the car’s cutting-edge electric powertrain and extreme performance. But for us, that was only the starting point. We have now unveiled a car that pushes the hypercar market to a higher level. We have utilized the full potential of the electric powertrain today, proving what we’ve always been saying – that electric hypercar, in the form of the Nevera, is beyond exciting, and that is as thrilling on the track, as it is cosseting crossing continents.”

We’ve been seeing the Rimac in bits and pieces since the concept was shown at the 2018 Geneva show, and Rimac says it has refined its new flagship, developed mostly in house, “on every level in the pursuit of the ultimate electric hypercar driving experience.” 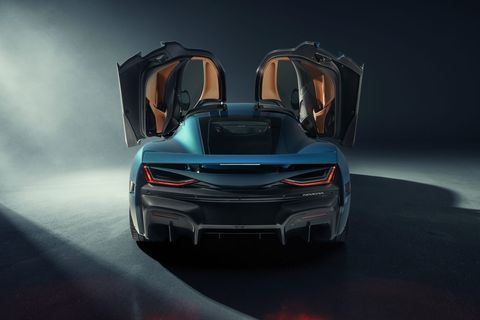 For the most part the concept’s powertrain has been carried over to production. That means a high-output electric motor at each wheel combining for 1,914 hp and 1740 lb ft. Rimac says the motors can channel “the precise level of torque” as needed to each wheel, making 100 calculations per second for “infinitely variable dynamic responses to road and track conditions.”

Rimac, which calls itself a hypercar manufacturer and “electric technology specialist,” figures the horsepower figure is three times the output of an internal combustion supercar.

“Capable of instantly summoning maximum torque from the first moment, the Nevera’s electric motors are 97 per cent efficient – compared with 40 per cent for the most effective internal combustion engines – and completely maintenance-free throughout their operating life,” the company said.

Rimac says the Nevera can hit 186 mph in 9.3 seconds, which is 2.5 seconds faster than originally planned. The Nevera has a 258 mph top speed and runs the quarter mile in just 8.6 seconds. The H-shaped battery is part of the monocoque chassis’ structure, and is a 120kWh unit, claimed to produce up to 1.4 MW of power. Range is 340 miles on the WLTP scale. The battery’s placement in the structure helps the car achieve a 48:52 front/rear weight distrubtion. Rimac says the car’s central monocoque weighs less than 440 pounds and is the largest one-piece carbon fiber structure in the automotive industry.

The Nevera has electrohydraulic regenerative brakes, calibrated to react to the state of the battery and powertrain. For example, Rimac says, if the battery is running hot, for example, kinetic energy will flow through the brakes back to the wheel, while the power recuperation can be increased if the brakes are hot. The braking system itself comprises 15-inch Brembo carbon-ceramic discs and six-piston calipers.

In what Rimac says is a world first, the Nevera’s steer-by-wire system can vary the feedback levels and the steering system also has a Driver Coach mode. This is an artificial-intelligence-based mode that shows the “optimum racing lines and vehicle control” to the driver. It uses several sensors, cameras and radars to offer audio and visual guidance as you blast around a track. Driver Coach is one of seven drive modes. That said, according to the automaker the Nevera is as much a grand tourer as it is a track weapon. The double wishbone suspension with electronically controlled dampers and active ride height adjustment “provides a combination of a smooth and comfortable ride, exemplary body control and ultra-agile handling,” the company says.

The cockpit is dominated by three TFT screens which present as much, or as little, information as the driver wants, the company said. Configured for both track driving and comfort, the layout is divided into two zones. The top segment focuses on driving pleasure and performance, while the lower part houses the infotainment system, comfort controls and driving data. 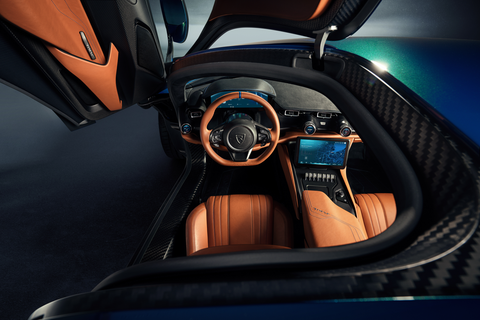 “Tactile billet aluminum rotary controls and switches – including three displays with rotating control – provide a resolutely analogue feel, tailored to enable the driver to utilize the cutting-edge digital technology in an even more engaging manner,” the company said. “From the cockpit, the driver can monitor every aspect of the car’s performance with real-time telemetry – downloadable to a laptop or smartphone for later review.”

Rimac is planning to build 150 Neveras, each bespoke to the owners wishes. Mate Rimac says he’ll tested and sign off every car.

Log into the comments and tell us what you think of this wild hypercar.