Before and after his retirement as a NASCAR driver, Buddy Baker served as a consultant and coach for up-and-coming racers. Ryan Newman is perhaps his most famous pupil.

There was a time, however, when Baker was the student and others did the teaching. Although he was the son of Hall of Fame driver Buck Baker, Buddy needed help as he entered the sport where his father had been a dominant force.

In the early years of his career, Baker approached pioneer driver Curtis Turner for advice in negotiating the very difficult Occoneechee Speedway, a fast .9-mile dirt track in Hillsborough, N.C.

“I asked him where he backed off going into the corner,” Baker remembered years later. “He told me, and when I got to that point I might as well have kept it wide open. I wasn’t going to make it through the corner anyway. I went backward through the gate and into the parking lot. I came back in and said, ‘Hey, are you sure you drive it in that deep?’ He said, ‘Yeah, but I’ve got 20 years’ experience.’ ” 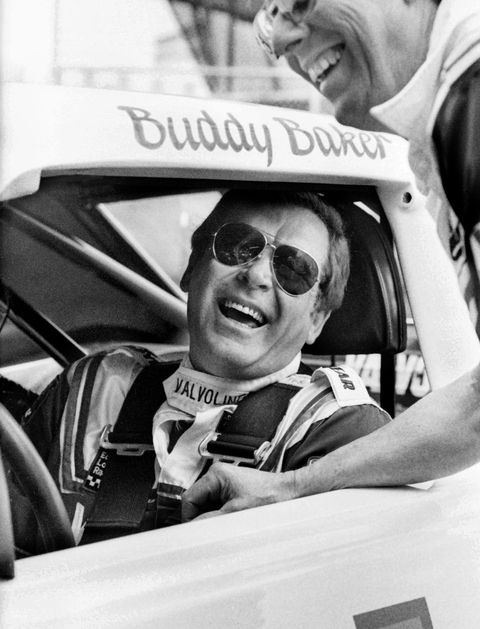 Baker did two things very well—drive race cars really fast and tell stories. His gifts as a storyteller served him well when he finally moved away from driving and built a second career in motorsports television and radio.

Baker loved to tell the story of a long-ago race at a Tennessee short track. He was injured in a crash. He was loaded into the rear of an ambulance. When the ambulance left the scene with a bolt, Baker left the ambulance. His gurney rolled out the back of the open door.

Elzie Wylie Baker Jr. (nobody called him that) began his Cup career in 1959 but rarely raced a full-season schedule. He was most at home on the circuit’s fastest tracks; six of his 19 career Cup wins were scored at Daytona International Speedway and Talladega Superspeedway.

Baker recorded a bit of NASCAR history March 24, 1970 when he became the first driver to average more than 200 miles per hour in a lap around a closed course. Baker reached that speed—200.096 mph—at Talladega Superspeedway, then in its second year, during test runs. He drove a winged Dodge Daytona, one of the fastest cars of that—or any—era. His fast lap that session was 200.447 mph.

“It’s the most wonderful feeling I’ve had in a long, long time,” Baker said afterward. “I’m tickled to death.”

Three years earlier, Baker had scored his first Cup victory, leading the final 78 laps on the way to victory in the National 500 at Charlotte Motor Speedway. Baker outran second-place Bobby Isaac by one-lap-plus in a Ray Fox Dodge. Baker called it “the greatest day of my life.” Baker’s win was noteworthy beyond it being his first. Richard Petty started the race with a streak of 10 straight wins and finally saw his near-complete domination of the tour halted.

Although Baker celebrated his first victory with numerous adjectives, he often told friends that nothing could top his win in the 1980 Daytona 500. Driving a car nicknamed the Gray Ghost because of its black and gray paint scheme, one that made his approaching car almost invisible to competitors, he won the race with a stunning average speed of 177.602 miles per hour. That speed remains a 500 record. 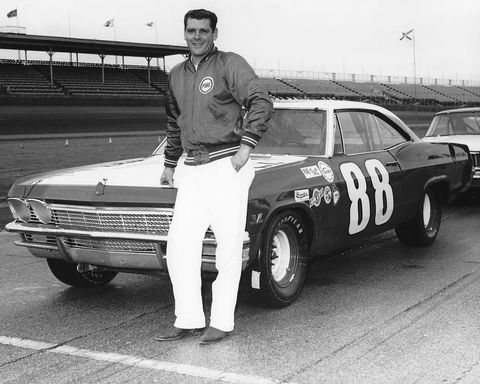 Baker said he grew up racing against men he called his heroes.

“The first time I beat them I realized you’re not really beating them, you’re beating the day or the situation,” he said. “Then you say, hey, maybe I’ll make it now. But every time you get a little overconfident like that, you get knocked back about 50 feet.

“The first thing the veterans told me is that it’s impossible, that you’ll never beat us. And by the time you get good enough to beat us we’ll be retired anyhow. I remember them asking me, ‘Have you shaved yet?’ or ‘Are you still on milk or have you gone to a grownup drink yet?’ ”

Baker did grow up—at 6-5 he was one of the tallest drivers in motorsports. And one of the most nervous. He was particularly nervous before qualifying. Amused garage area workers would watch as he paced up and down the garage waiting for his turn on track. A newspaper once asked him to wear a pedometer on qualifying day to record how many miles he walked, but he grew tired of the experiment and removed the device before jumping in his car. 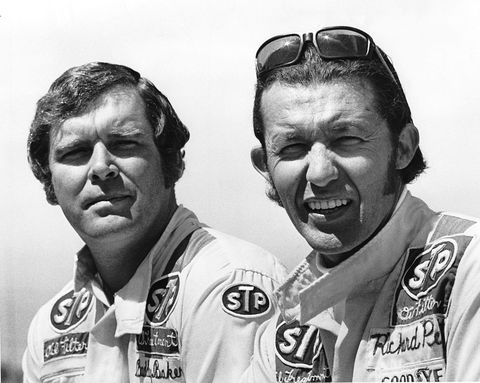 “Buddy was always wide open, and that’s the way he raced and lived his life,” said Petty, whose team employed Baker as a driver in the 1970s. “He was always full of energy. He was a person you wanted to be around because he always made you feel better. He raced with us, shared his stories with us and became our friend.”

• Baker began his career driving his father Buck’s cars. Much later, they teamed again in operating the Buck Baker Driving School, a school for new and aspiring racers, at North Carolina Motor Speedway.

• What Baker might have called a “lowlight” of his career occurred in the 1969 Texas 500 at Texas World Speedway, where he had a two-lap lead on the field but lost concentration and ran into the rear of another car during a caution period, losing a shot at victory for team owner Cotton Owens.