The grid is buzzing. All 20 Formula One cars are lining up on the grid for Saturday’s sprint qualifying for the 2021 Brazilian Grand Prix. There’s a long wait—the last driver is taking their sweet time, letting the frontrunners’ tires get cold. The driver in 20th place is—record scratch—Lewis Hamilton. You’re probably wondering how he got there.

Coming into the weekend, the F1 title was very close in the constructors’ championship, with Mercedes and Red Bull separated by just one point. It was markedly less so in the drivers’, with Max Verstappen carrying a 19-point lead to Interlagos after what had seemed like a lackluster weekend in Mexico City for Hamilton. Making matters even worse, the Brit was confirmed to be taking a fifth internal combustion engine of the season, and subsequent five-place grid penalty in Brazil for exceeding his allocation.

That was all adding up to a pretty bad weekend, especially given some additional complications in Brazil. Not only did F1’s air freight—including the cars, their power units, and toolboxes—turn up until late on Thursday forcing teams to work through the nightly curfew to prepare garages, but it was also the final sprint qualifying weekend of the 2021 season. 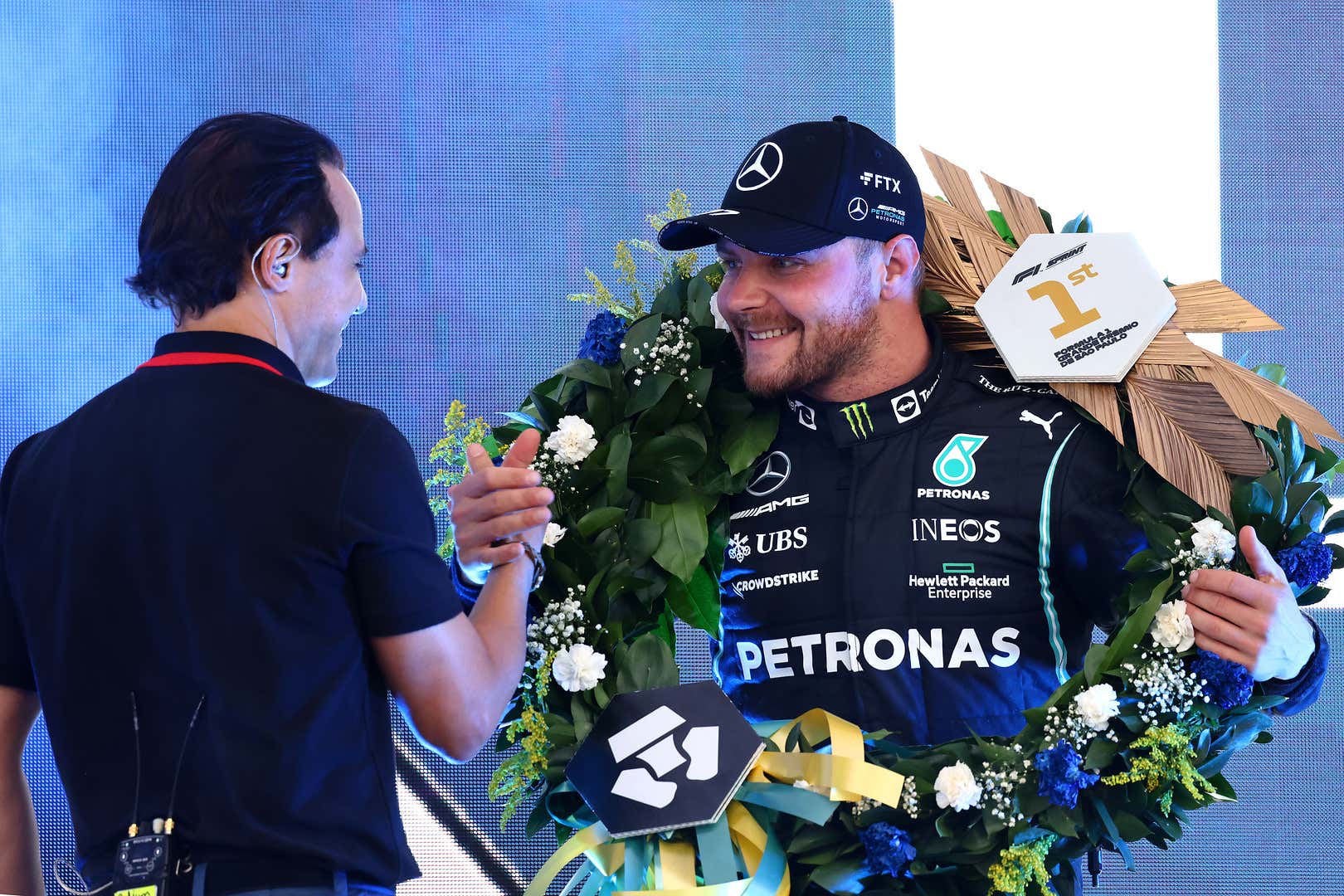 This man won the sprint, he is not Lewis Hamilton

That meant only one hour of practice on Friday morning before a conventional qualifying session to decide the grid for the sprint race on Saturday—the one Hamilton ended up lining up last for. Hamilton managed to be fastest in qualifying for the sprint, which could have put him in a good place for Sunday’s race regardless of his five-place grid penalty. But then, he was shockingly disqualified from the Friday session for a technical infringement on his car’s rear wing.

Hamilton, though, roared up the grid moving from 20th to fifth place across the shortened race. It was evident that even after serving his penalty and starting 10th for Sunday’s race, he could charge to the front and win the race.

That’s impressive, and also the kind of stat that people are wheeling out to say Hamilton’s got an unstoppable rocketship that has to be cheating.

On race day, Hamilton’s move up the grid wasn’t totally unencumbered, with the Ferrari drivers making him work to pass them. But it’s true the Mercedes is a very fast car, especially when the internal combustion engine is fighting fit instead of gasping, like in Mexico City. Predictions were that Hamilton was going to ruin his tires with late-braking moves, but those didn’t manifest. Brazil is hard on tires but Hamilton’s a seven-time champion who’s been doing this since 2007. The man has a handle on how far he can push Pirellis.

The rest was visible on track and in the pit lane. Mercedes undercut Red Bull, Red Bull tried to respond with an undercut itself for the second stop and ended up disadvantaging Verstappen on track with older rubber than Hamilton. Hamilton harried the Red Bull relentlessly and despite the two running wide into turn four at one point, they managed to—unlike every
other sprint weekend so far—avoid a collision. Hamilton brought it home with more than a 10-second lead, Verstappen easing off his Honda power unit in the final laps.

Since then, because F1 discourse in 2021 is impossible to have at a normal pitch and has to be engaged with at the volume, urgency, and sheer rotational torque of a tire gun, there have been loads of things said. Some of them by Red Bull’s Helmut Marko who’s mouth-running went as far as saying Hamilton’s new engine was giving him 20 horsepower extra. 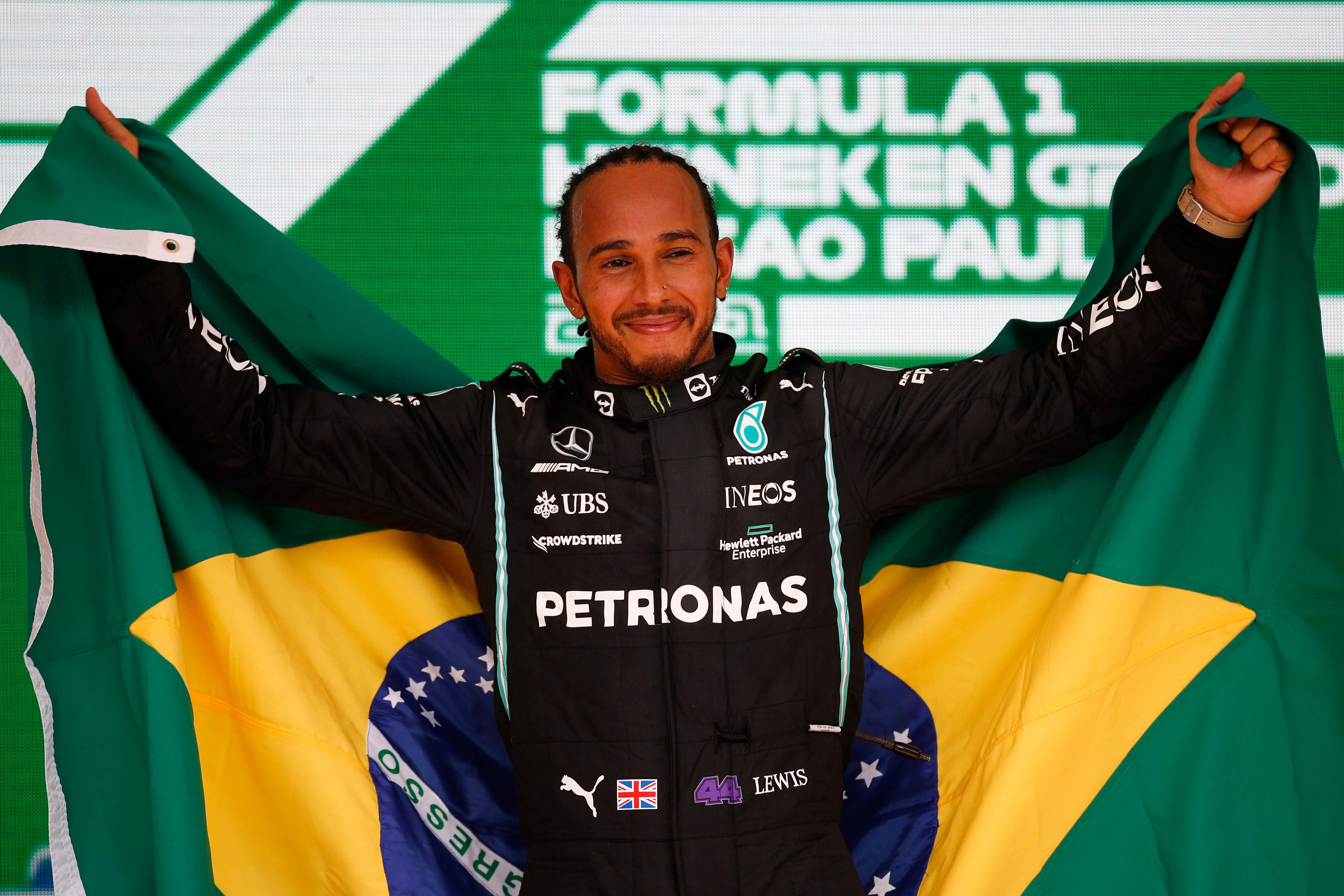 The truth is, yes, Mercedes probably let Hamilton turn the V6 up a bit. Toto Wolff told Sky F1 that he’s now got two available internal combustion engines (a major reliability weak point of the Mercedes power unit this year) to last the last four races, including Brazil. But F1 cars don’t move up the grid on sheer horsepower alone, and culpability for Hamilton’s victory has to, at least, partially go to Red Bull for muffing up their tire strategy.

It might be annoying and boring for some people to say it, but the real reason Hamilton’s so successful is that he’s extraordinarily good. He’s made mistakes this season, yes, but Hamilton’s drive last weekend was classic Hamilton. He even said it himself after the race, mentioning that his dad had reminded him about a similar race many years ago. Way back in 2004, when Hamilton was still driving Formula 3, he got dropped by McLaren ahead of the Bahrain round. Driving for his career, he started the first race last and got up to 10th, and then started the second race tenth and won it. And Formula 3 is a spec series, so it wasn’t just “the car.”

Sometimes you really have gotta sit back and be grateful we get to watch performances from probably the greatest to ever do it. So far, if Verstappen wants the mantle, which he’s surely capable of taking, he’s got a long road ahead of him.

Got a story tip? Email us at [email protected]