Join us as we delve into the latest technical developments on display in Friday practice for the Hungarian Grand Prix at the Hungaroring, courtesy of Motorsport Images.

Click on the arrows on the images to scroll through them… 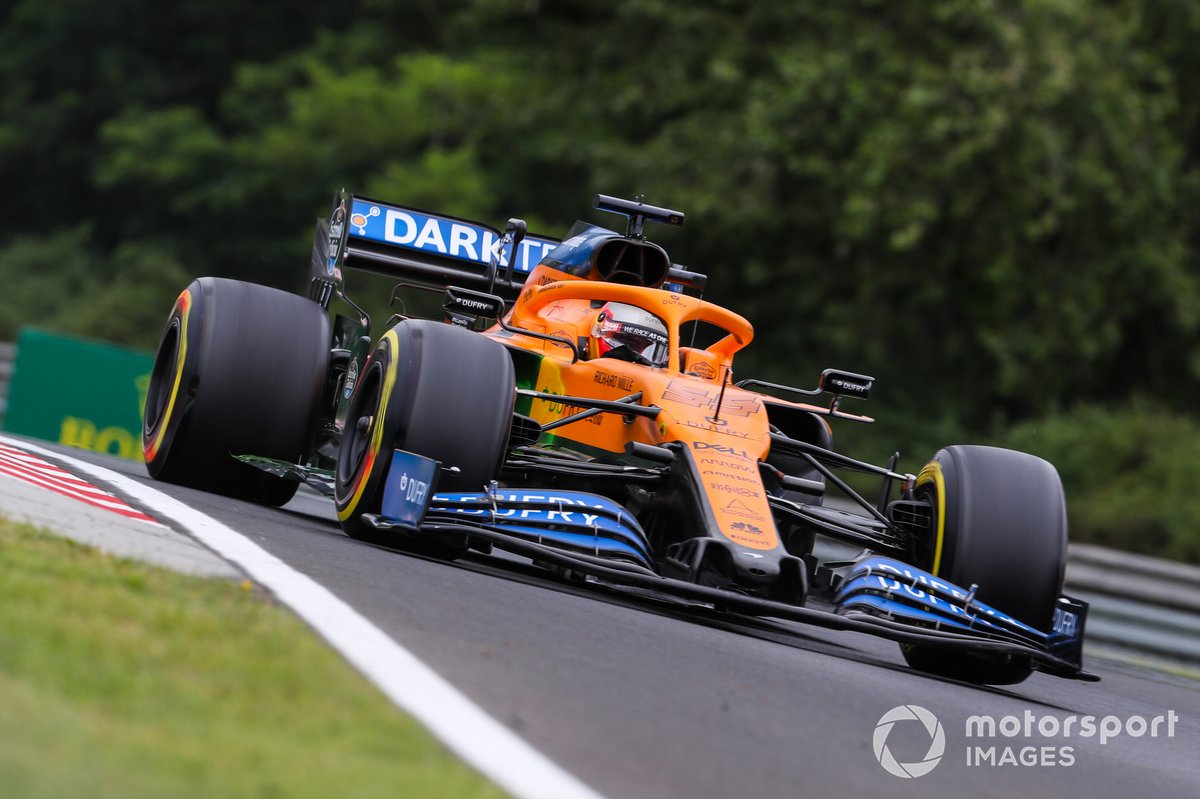 McLaren applied flo-viz paint on the side of the MCL35’s cockpit during FP1 as it looked to gather physical confirmation of how the flow is moving around the car. 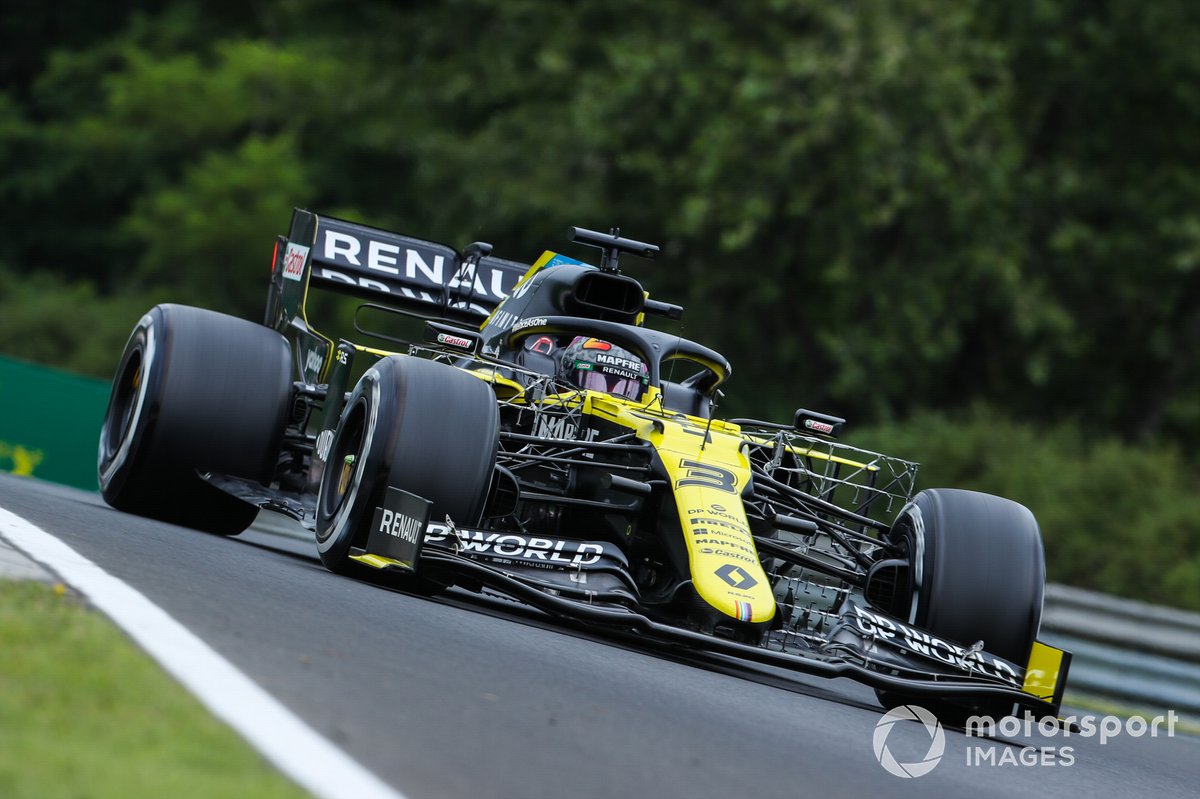 Daniel Ricciardo with Kiel probe rakes mounted to his RS20 during FP1 to gather data. The team made back-to-back comparisons with different front wing angles applied too. 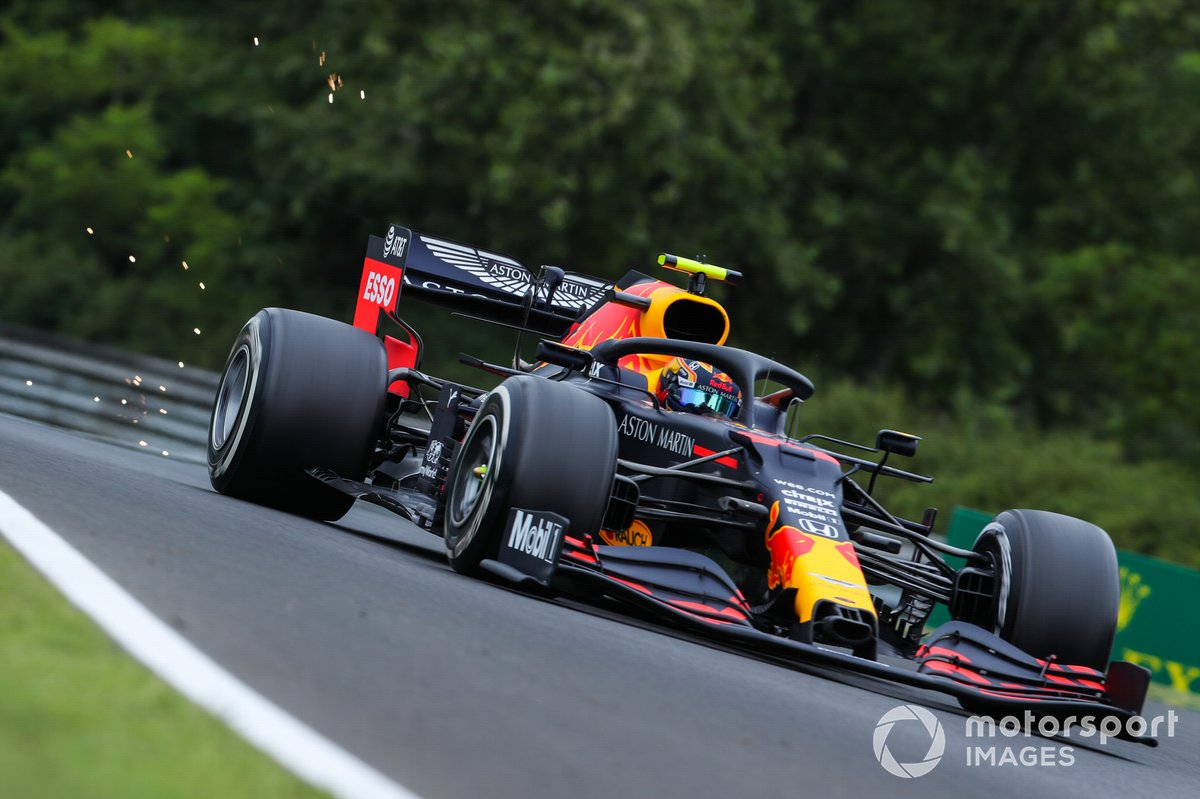 Alex Albon during FP1 with the base high-downforce aerodynamic specification RB16 applied, complete with the single element T-Wing that has appeared for this race. 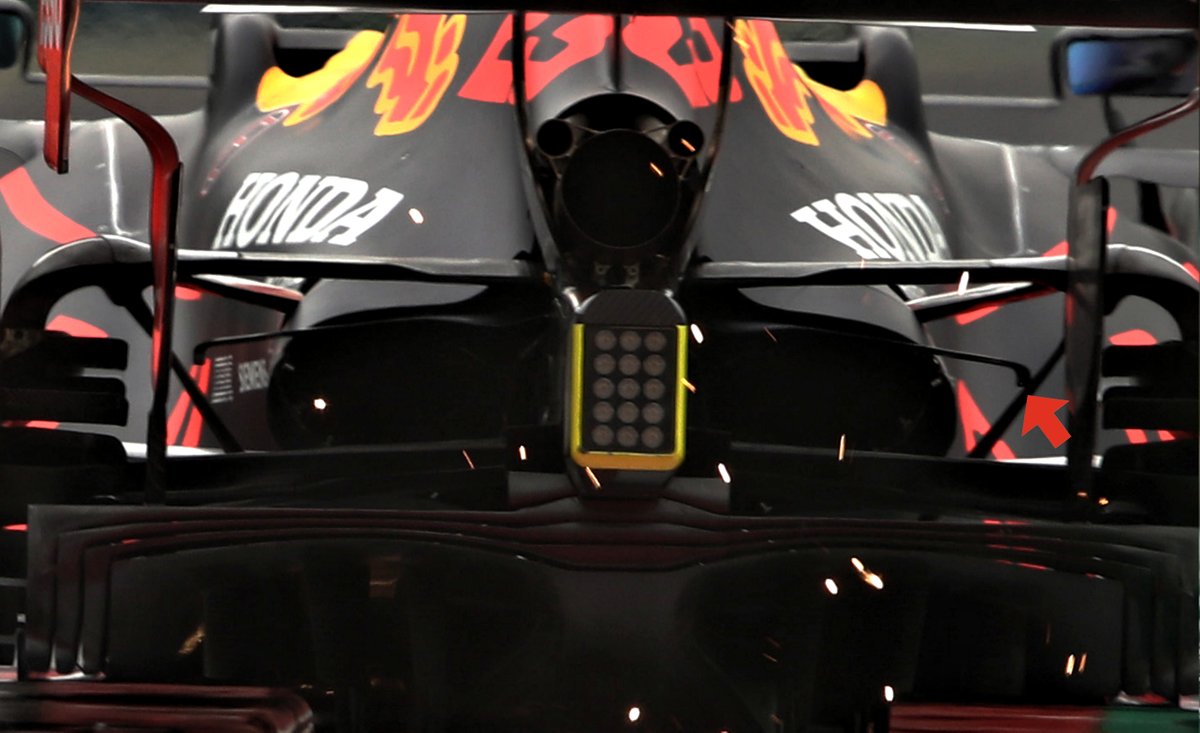 The RB16 also has with a lower T-Wing in Hungary, similar to a solution used by Mercedes for some time and adopted by Racing Point this year too. 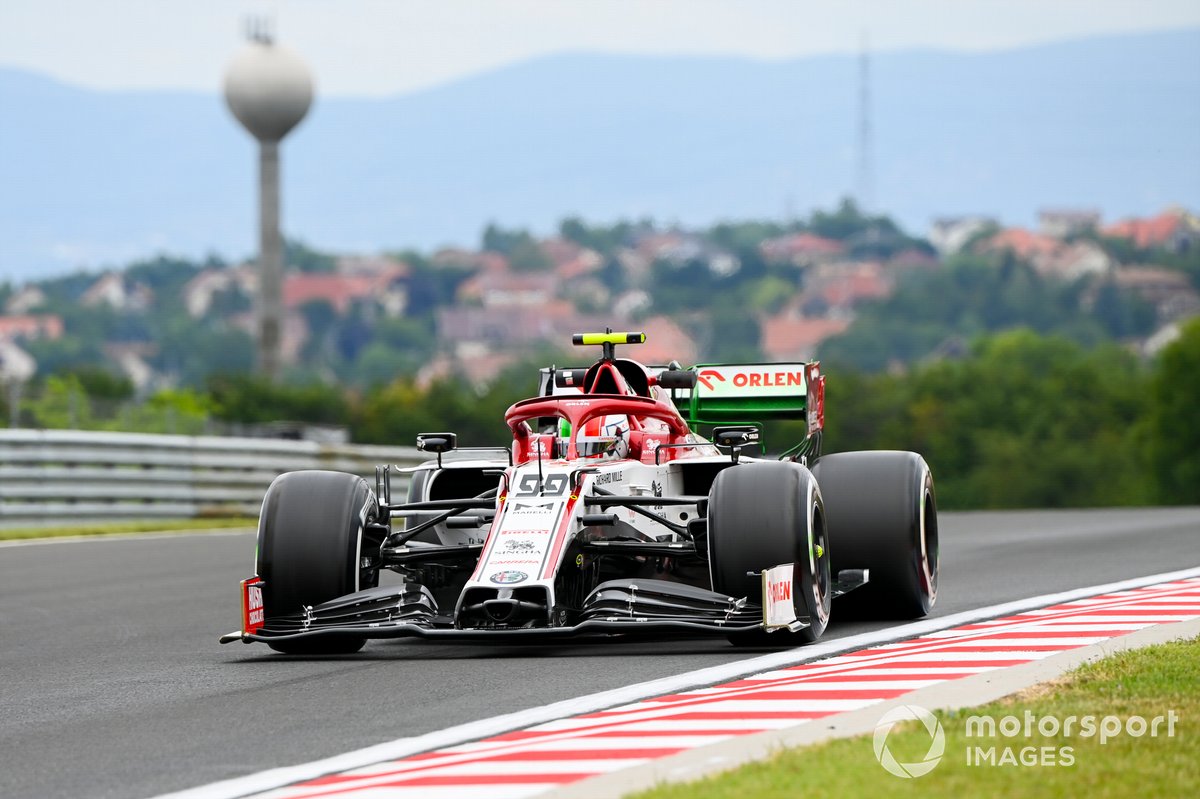 Antonio Giovinazzi’s Alfa Romeo C39 painted with flo-viz during FP1 to check how the rear wing is performing. 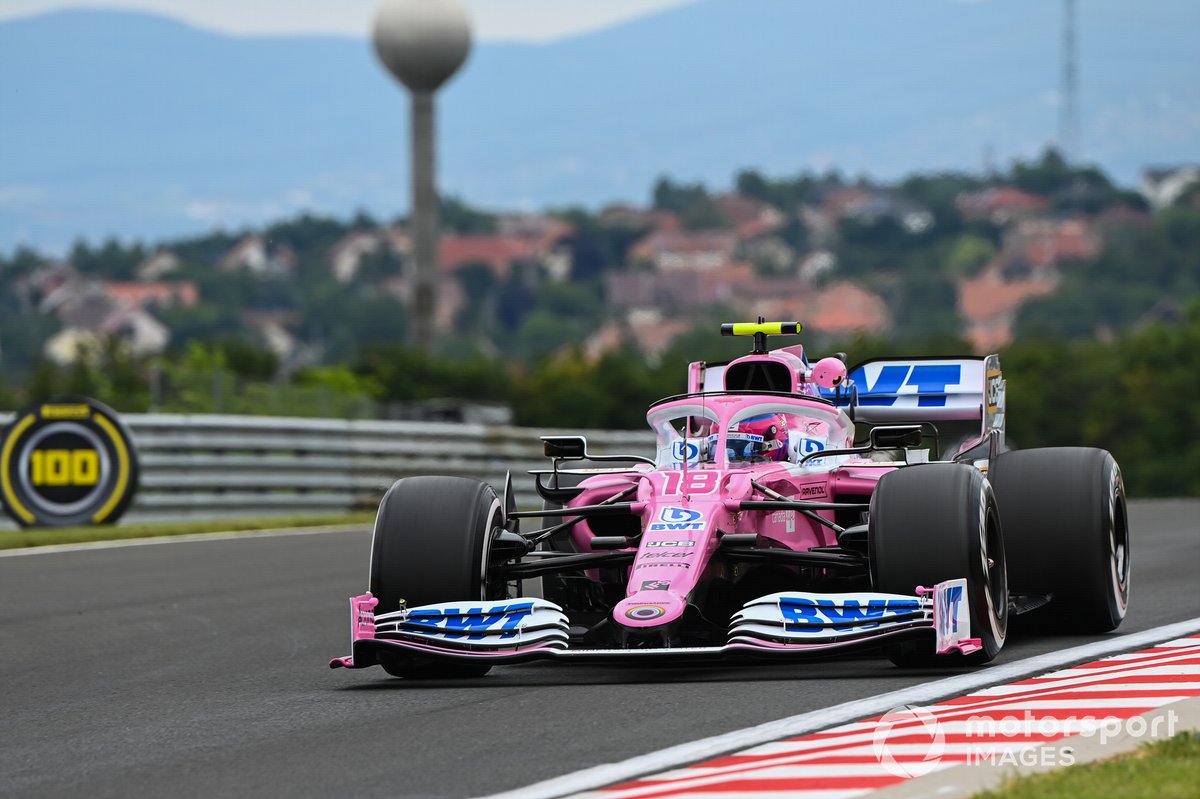 Lance Stroll with just the one additional camera pod on the side of his airbox during FP1, as the team looks to build a picture of the tyres’ performance around the Hungaroring, via the thermal imaging cameras housed within. 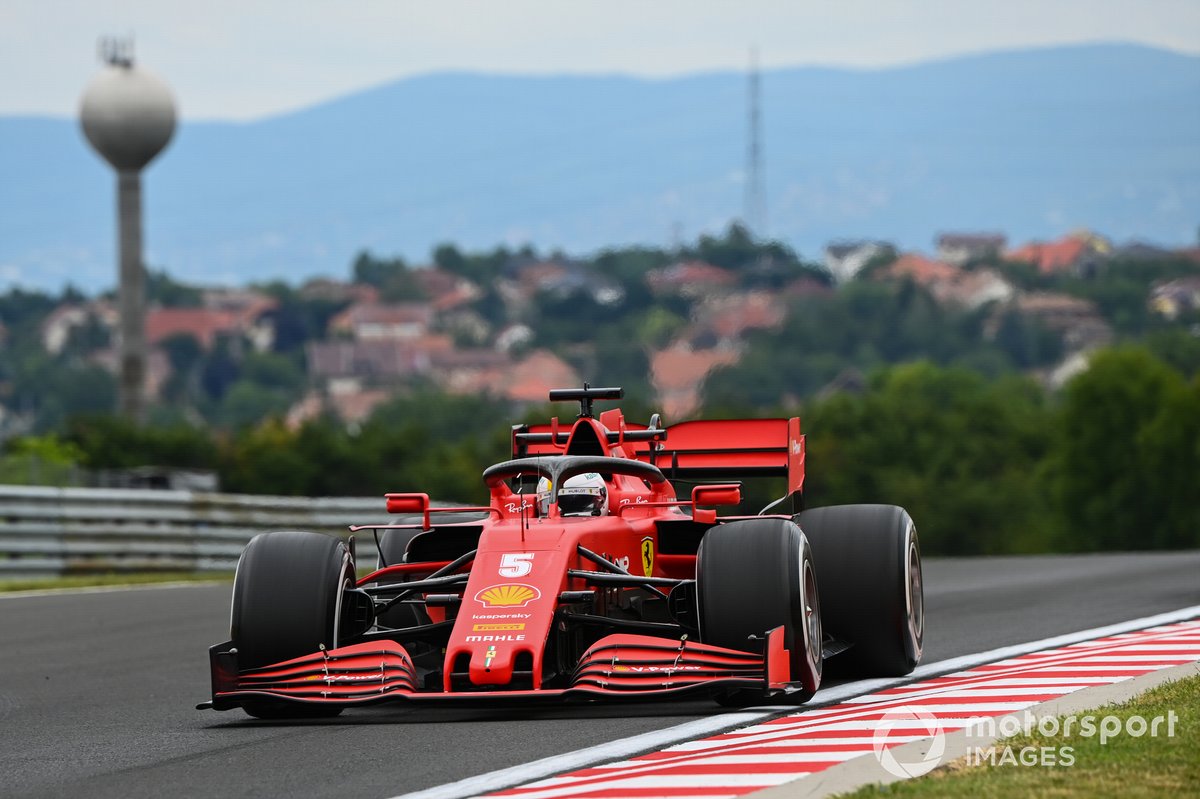 Sebastian Vettel at the wheel of his SF1000 during FP1, with the team having reverted to the older-specification front wing. 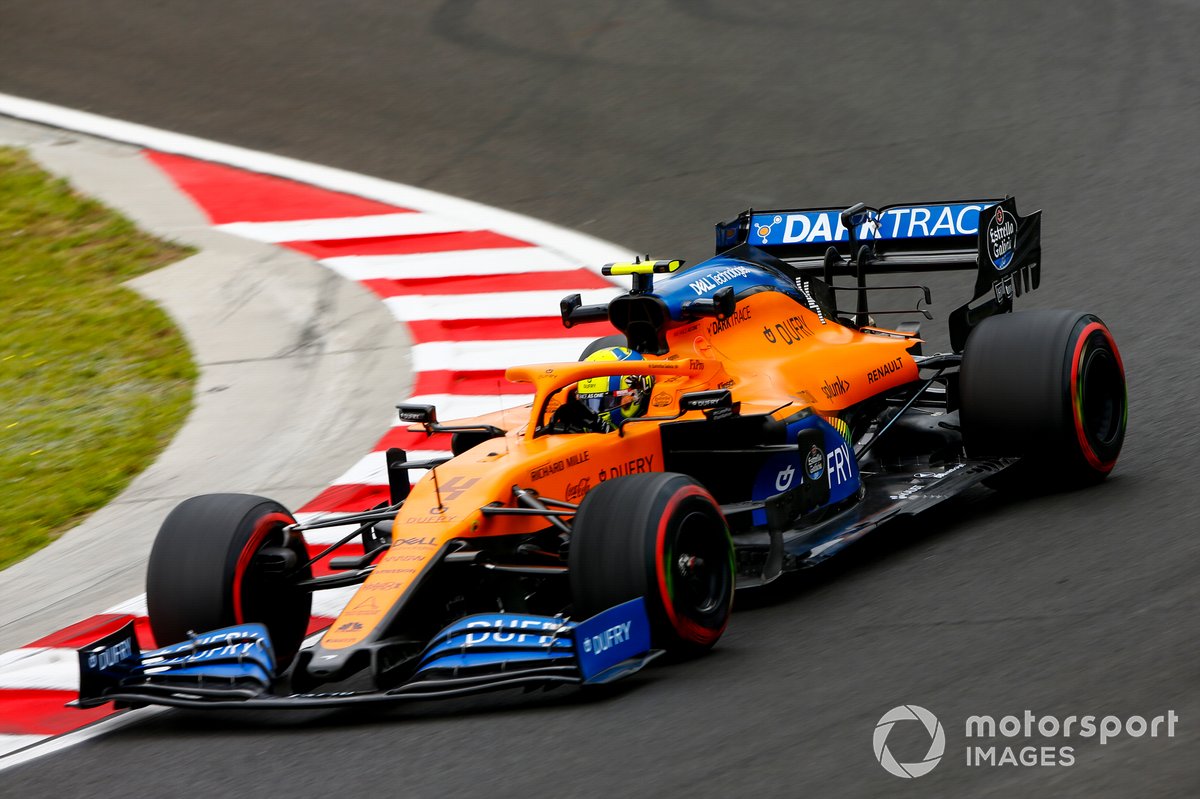 McLaren installed a two-tier T-Wing for the Hungarian GP – but it’s not new, as we saw it used in pre-season testing. Also note the flaps above the rear engine cover cooling outlet that the team tested in Austria but didn’t race. 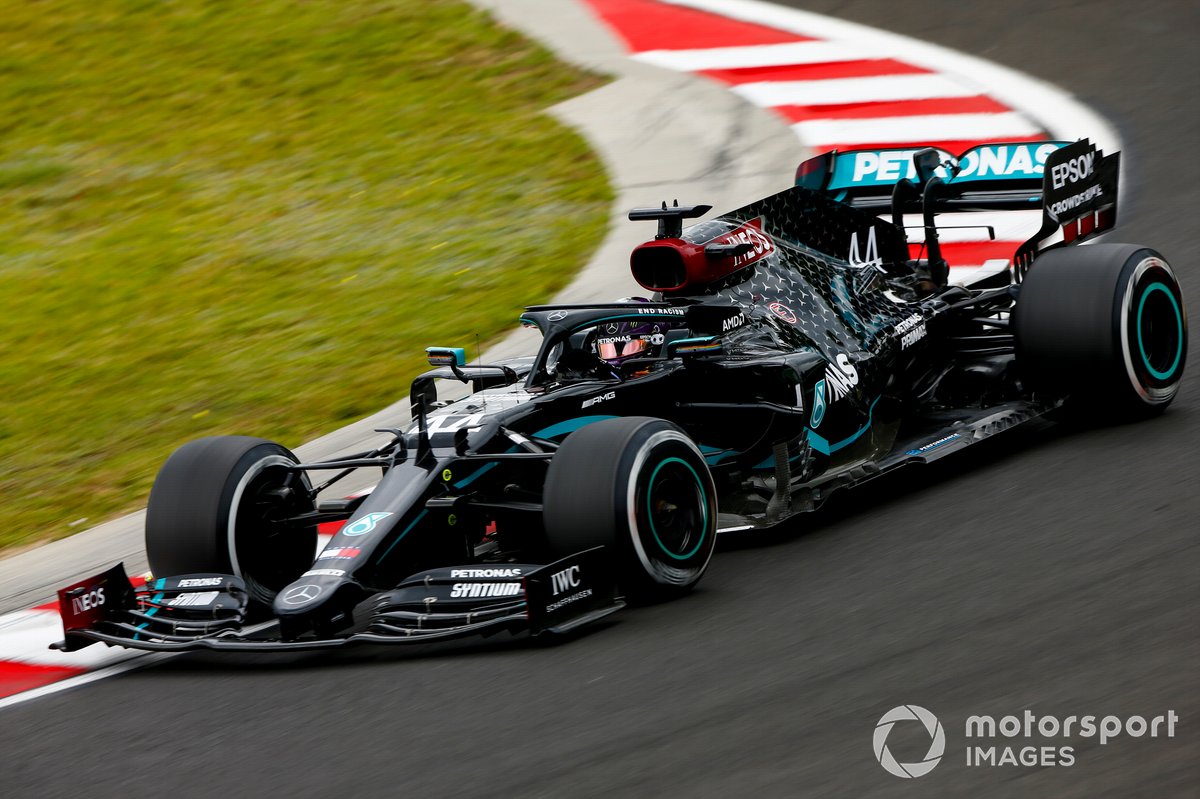 Mercedes reverting to the two-pillar rear wing arrangement for the higher downforce demands, and the T-Wing also returns. 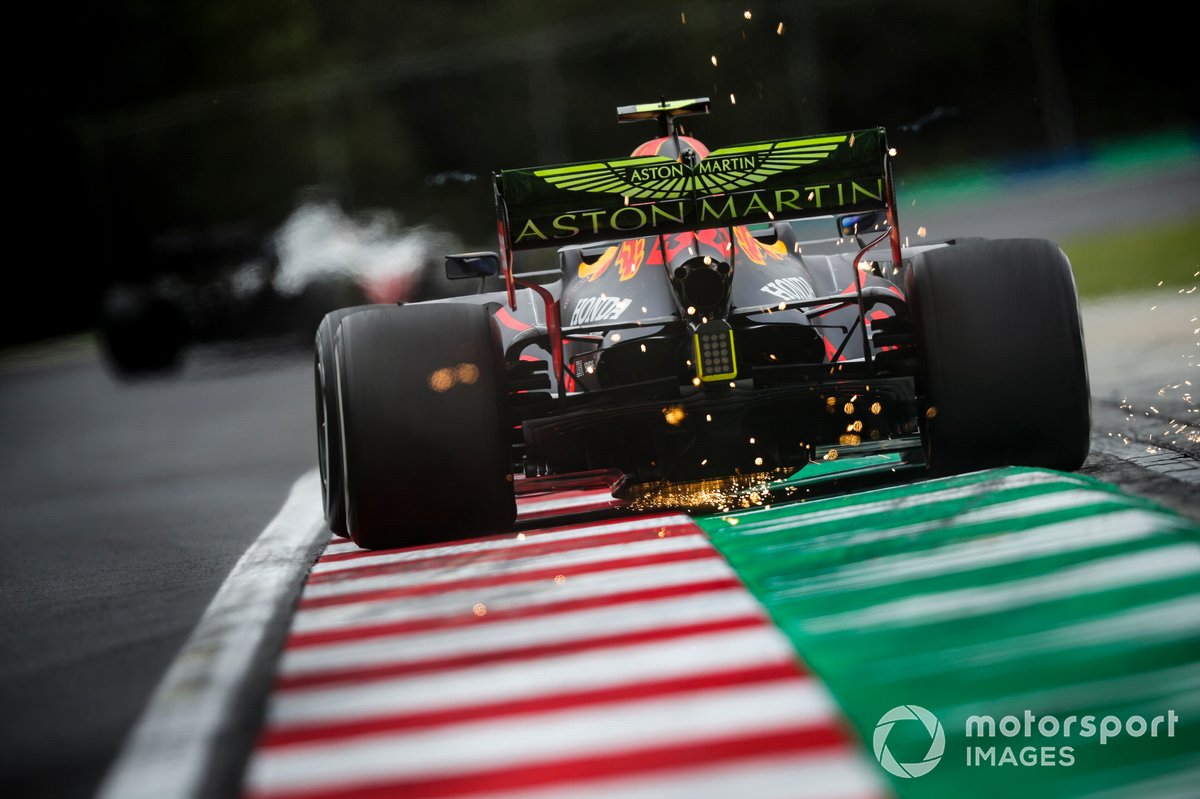 The rear of Alex Albon’s rear wing is painted with flo-viz as the team conducted back-to-back tests during FP1. Note also the formation of the tip vortex, which is quite tightly wound. 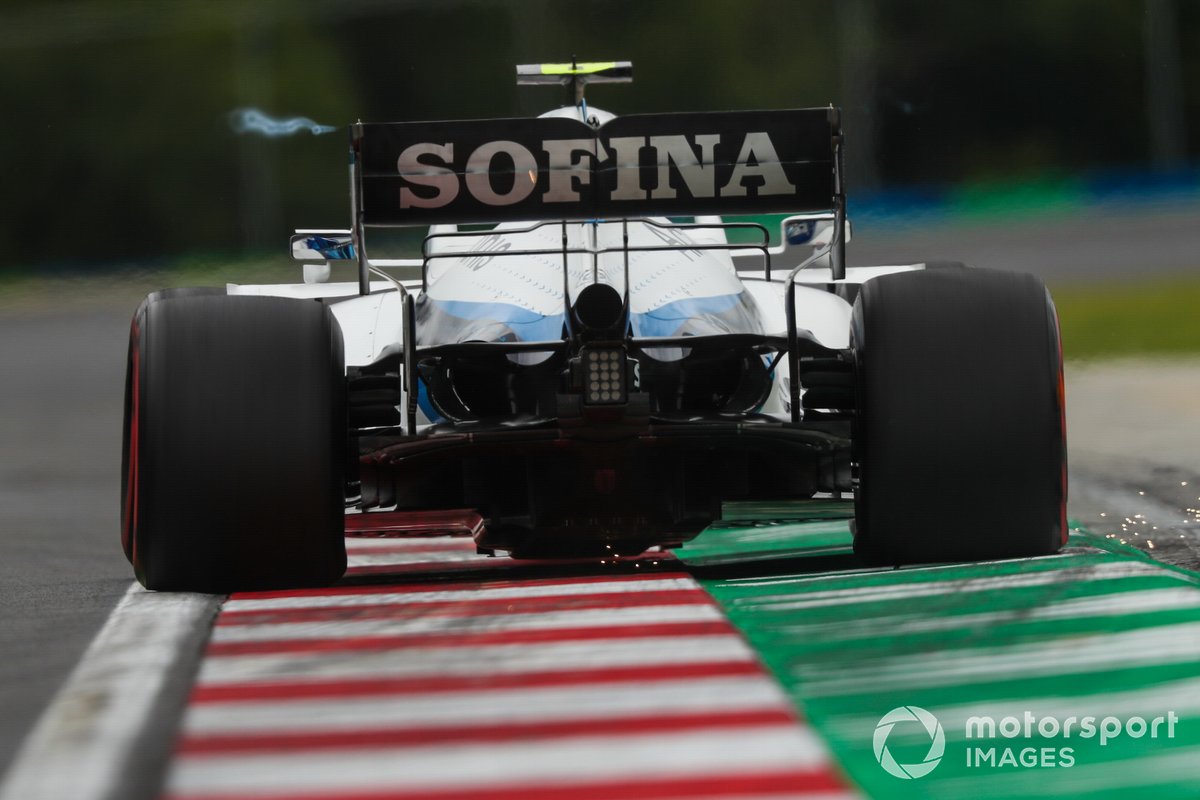 The Williams FW34 from behind gives us a good view of the large cooling outlet for the warm conditions, the diffuser and – due to the humid conditions – the appearance of the rear wing tip vortex. 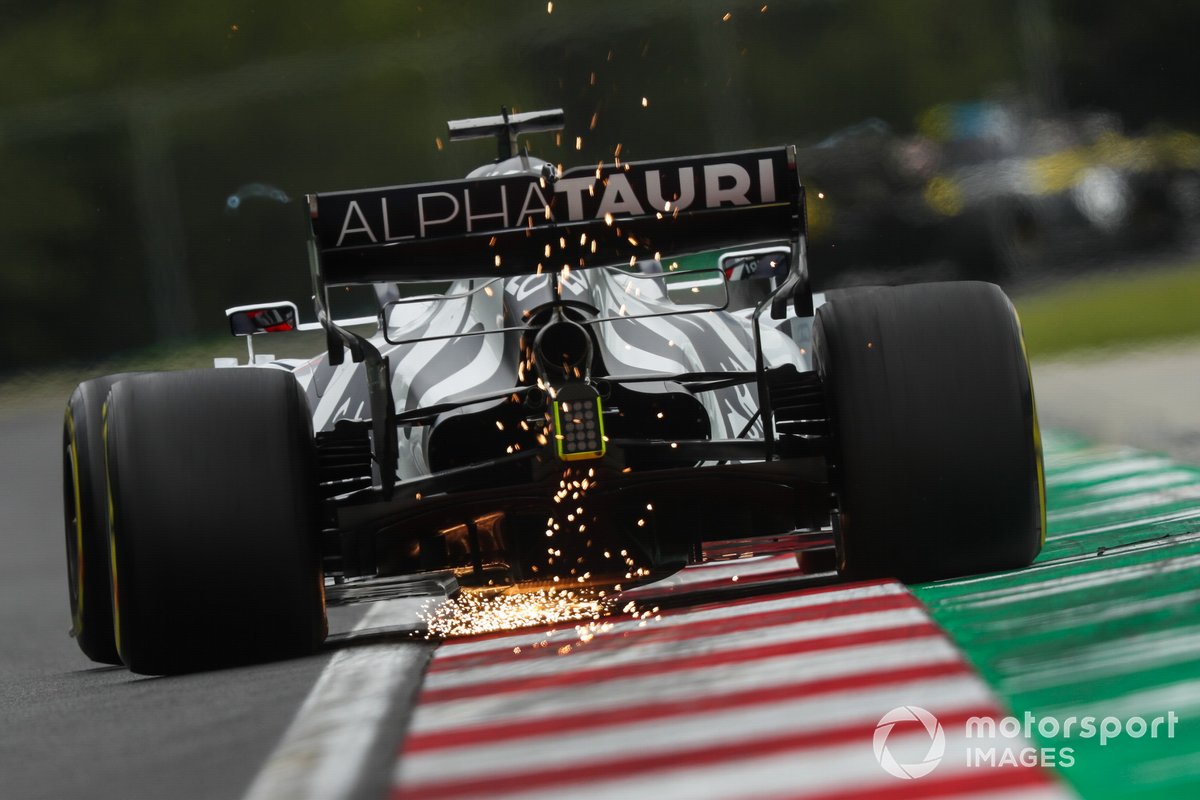 Sparks fly off the titanium skids on the AlphaTauri AT01 as it rides the kerbs. 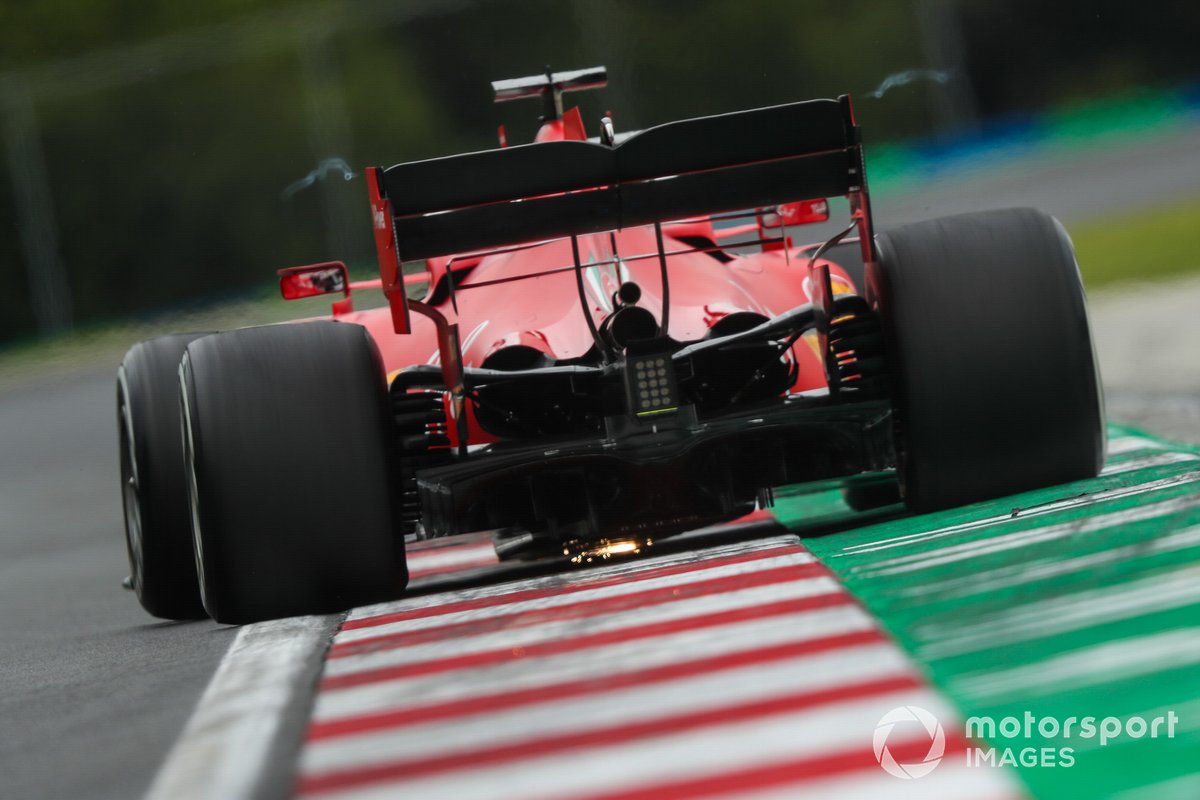 A rear end shot of the Ferrari SF1000 with the tip vortex peeling off the rear wing.