So the cars are the same, right?

Well, not really. On the surface, the 2021 Formula 1 machines are basically the same as in 2020, as the teams all agreed during the first COVID-19 shutdowns last year that it was best to keep the same chassis in 2021 to save money.

An exception was made for McLaren as it was the only constructor to change engine suppliers (from Renault to Mercedes) for 2021. But around the basic chassis, teams were allowed to do much as they pleased, allowing for restrictions from the FIA aimed at slowing down the cars by removing some of the aerodynamic downforce. This was decided after a series of tire failures at Silverstone, which suggested that the downforce levels were stressing the tires too much.

The key change is that the rear floor, where much of the downforce is generated as the airflow leaves the car, has been narrowed by 100 mm (3.9 inches) just in front of the rear tires. Less area means less downforce. In addition, the federation ruled that slots, strakes and vortice-generating curls, which help to smooth airflow around the rear wheels and tires should also be outlawed. There were various other details but the overall goal was to reduce downforce by 10%. Given the development since then the actual loss, after the Bahrain tests, is reckoned to be about five percent, but this means that the lap times will be slower.

The minimum weight of the cars (without fuel) was also increased from 746 kg to 752 (1,644 pounds to 1657), while that of the power units rises from 145 kg to 150 (319 pounds to 330) discourage the use of expensive rare material. It is worth mentioning that some new materials are being allowed if they are deemed to be ‘green’, so teams can now use flax, hemp, linen, cotton and bamboo, if they choose to do so.

The Pirelli tires are a little different, as well, as they have more robust compounding and a stiffer shoulder construction. The aim of this is to lower minimum pressures and thus make the tires better able to operate across a broader spectrum of temperatures, and there has been an associated potential aerodynamic penalty because they have a more square-edged cross section.

So while the cars look similar to last year, the designers have done a lot of work on details and now everyone needs to work out how to make the tires work with the new downforce levels.

The teams are limited this year to one aero update, and there are time limits on wind tunnel and CFD programs under the Aero Testing Regulation scheme where less time is permitted on a sliding scale from the best to the worst teams in order to try and give the slower competitors a chance to claw something back. These figures will be reassessed halfway through the year and altered according to the World Championship placings. 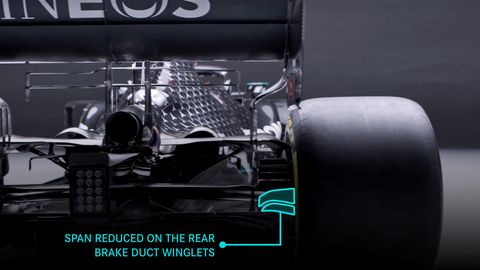 In addition to this, the FIA has introduced more limitations on reverse-engineering to stop any other teams doing what Racing Point did last year with the 2019 Mercedes, and the Dual Axis Steering (DAS) system used by Mercedes last year to change the toe of the cars during the lap by sliding the steering wheel backwards and forwards, has been banned so Mercedes will have to find new ways to warm its front tires.

Engine-wise, teams have been allowed to make a number of changes to the power units, but only one update is allowed at the start of the season. So they need to get it right.

“If you are looking at this new season of 2021 and you are thinking it is just going to be a carryover of what we saw in 2020, well, don’t be fooled by anyone who is telling you that,” says Mercedes technical director James Allison. “The rules are very, very different for 2021, the work we’ve had to do has been very wide-reaching. It’s been a really unusual, unfamiliar but intense winter development period for this new car. I say intense, because although bits of this car have carried over, the challenge of getting it ready for a new season has been every bit as difficult as it normally is because a lot has changed.

“Probably the most intense and difficult thing for us is reacting to the aerodynamic changes that come for 2021.”

Mercedes is the only team feeling that way. Red Bull boss Christian Horner says that the RB16B will have only about 60% of the same parts as the RB16.

“Like all cars, there will be a lot of component carry-over next year,” Horner said. “Our car has a decent foundation. We know what our weaknesses are compared to our rivals and there is the focus of development during the winter. “