There are people you don’t see on TV, but who help the Formula 1 circus keep the show on the road. Here, Motorsport.com brings you their story. This week it’s Rupert Manwaring, the performance coach of McLaren’s Carlos Sainz.

My job is performance coach for Carlos Sainz. I make sure that he’s as prepared as he can be mentally and physically for every time he needs to step in the car. It’s quite a broad role. It obviously includes things like his physical training, nutrition, sports therapy and making sure that he’s fit. But it’s also managing as best as possible any niggles he may be having at the time. I’m there as a bit of a right hand man if you like.

We’ve been working together since the end of 2015, so I know him quite well. I know what works well for him as a racing driver, more or less, although I’m always learning. And I just help try to get the right atmosphere and environment around him and make sure that he’s in the best place mentally and physically to perform at his best.

We normally arrive at the track on a Thursday. Carlos would be quite occupied in meetings with his engineers, and he also has press and marketing responsibilities. My job then will be to check in with the team, to set up his driver room the way that both of us need it for the weekend. There’s lots of small jobs, regarding his kit, his equipment, making sure everything is there when we need it.

I will also spend a bit of time with the kitchen to make sure that his food plan for the weekend is all ready. Sometimes you go to a race and there might be some differences in what foods are available, so we might have to veer off a little bit from what our normal routine is, but we try to keep things as regular and as normal for him as possible, so there are no surprises. Then I would check over his schedule with the communications team, making sure that the human performance part has been considered and that we have all the time that we need. 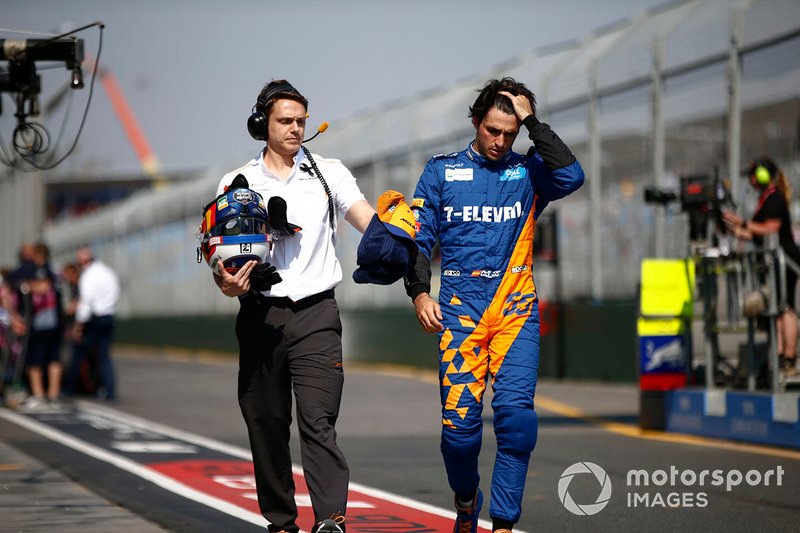 On Friday we would build our schedule around FP1 and FP2. So we’ll go through a mobility warm up routine in the morning, when we arrive at the track, just to make sure that everything’s fine and that he’s feeling good. Obviously, then the food plan kicks into action, and pre FP1 and pre FP2 we’ll do a full warm up. Post FP1 there’ll be a snack, and then a bit of a break, whilst he’s in meetings, so I’m just preparing things for FP2.

Then FP2 happens. Obviously, it’s been his first time in the car that weekend, and if all things have gone well he’s done a lot of laps. So there might be a sports massage later on Friday night and, again, a bit of a check-in with him if there’s any injuries or anything that’s kind of feeling a bit tight or a bit sore. Obviously that’s my chance to treat him with a bit of sports massage or whatever we might deem is necessary.

On Saturday we have a little bit of a late start. So I’ll check in with him at the hotel, we’ll get a very light session in, as we don’t want to waste any energy. Again it’s more about just making sure that the body is feeling good and ready for what is obviously quite a tense day with qualifying. Everything is very scheduled, to the minute, to keep the routine nice and familiar, so that he can really just focus on what he needs to focus on. Part of my role is to take out the unnecessary stresses and thoughts that might distract him.

As you know, qualifying is quite a stressful point of the weekend for the driver. So then, on Saturday evening, there is a time to mentally reset. We might have a bit more of a bigger meal Saturday night, to make sure that he’s properly fuelled for the next day.

Sunday morning. Check in, probably a slightly longer warm up. We might discuss the race a little bit, how he’s feeling mentally as well as physically depending on how qualifying went. And really, I’m just there. I’m not going to go into too much details, but it’s all about making sure that he’s got his mind set on the race. Obviously if he’s got any nagging thoughts from the day before I might try and reassure him, but generally come race day Carlos is pretty focused.

Then there’s just the final preparations pre-race. As we get closer to the race itself, we’re looking to get the nutrition and hydration on point. The hydration element might change depending on which race we are at. In Singapore, for example, that plays a bigger part. In Singapore we might do some time in the ice bath, which Carlos loves, to make sure we get his core temperature as low as possible. And then we’ll go through a normal warm up, which involves a little bit of boxing, some reflex work, a bit of strengthening and activation of the neck to make sure it’s warmed up for the race. And then, obviously, we go to the grid. 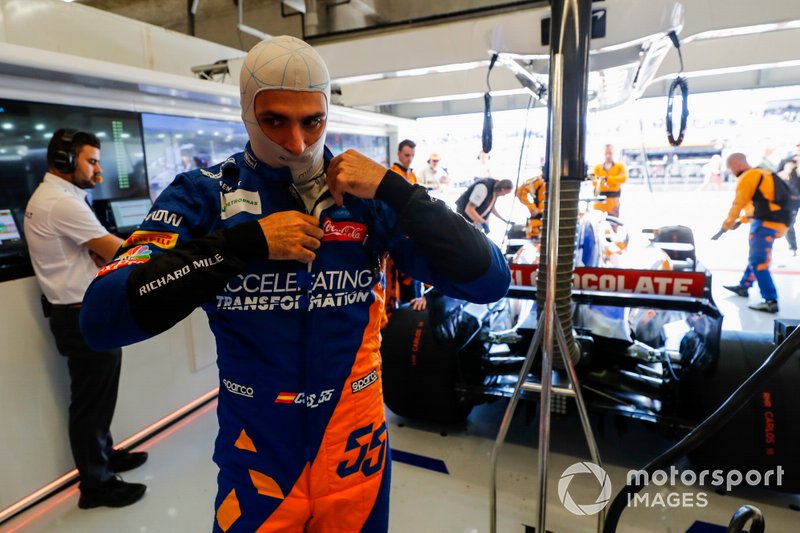 We have a little bit of time once he gets out the car after doing the laps to the grid, where we might do a little bit of a re warm up. It’s five minutes where again we might test his reflexes, but by that point, hopefully, if everything’s gone to plan, he’s relatively ready to get in the car and do his job.

And then Sunday evening… let’s see how the race goes before we kind of decide the plan for the night. Sometimes it might be a rush to the airport, other times it might be a more kind of relaxing meal with the engineers to hopefully celebrate a good result, or group together and refocus for the weeks ahead.

Most important thing in my job…

I would say the most important thing really is the driver’s headspace. It’s making sure that the driver is in the right place mentally to do his job. Obviously all the physical elements are important, and that’s the basics that you need to get ticked off. But I would say, when it really comes down to it, you know, a confident happy driver is more likely to perform well.

Three tools I can’t do my job without…

I’ll start with the schedule. It is a very important tool because it really sets the tone for the weekend. It gives you all a bit of a focus and a common plan for what we’re doing.

The second thing I would say is space. Obviously some paddocks are smaller than others, but we need to make sure we have a bit of space to perform a warm up and also just to have a room, where he could go and mentally kind of reset.

And the third one… I would say a really good skilled catering team at the track. Obviously nutrition is important, for a number of reasons, and if you’ve got a really good catering team – and we’re lucky to have that at McLaren – that also helps to keep the driver happy and well fuelled for every session that he has to be involved in. 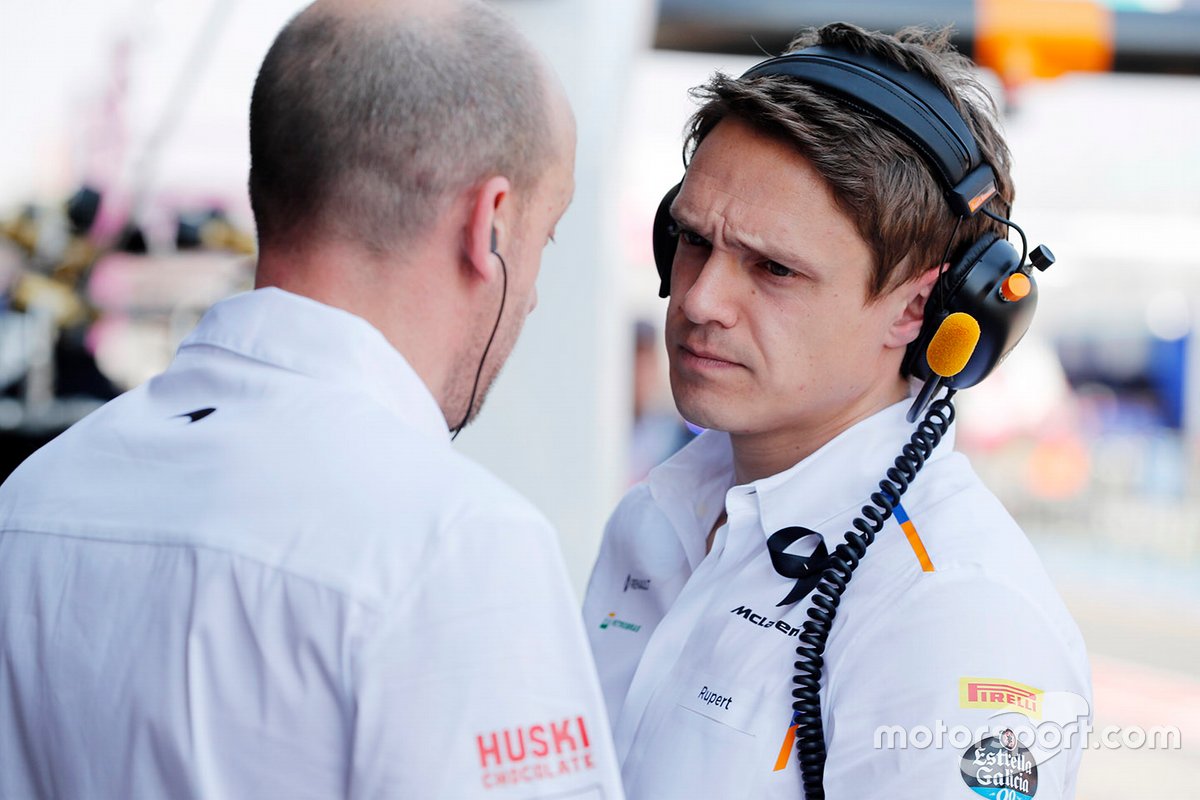 First is Carlos’ manager, Carlos Onoro. We work closely together on everything to do with Carlos’ schedule, and all of Carlos’ responsibilities for race weekend.

Then there’s Charlotte Sefton who supports Carlos on the communication side. So, I’m always liaising with her on Carlos’ schedule. Sometimes I’m helping her to make sure that he is ready on time for certain appointments as best I can. Or she’s helping me in some other things, like making sure that Carlos has his drinks bottle ready for the drivers parade.

And I would say that the third one would be Carlos’ race engineer. A little bit for me, to understand better how the weekend is going from a driving point of view. And for him as well, if there’s anything he needs me to do, like giving Carlos reminders for certain things, or just checking in about Carlos’ mood and those sorts of things. I would say those are the three main people that I would check in with every weekend.

When not at the track…

Between the races, we’re normally back in the UK. Carlos and I both live quite near the factory. So Carlos will have engineer meetings and simulator at the factory. And me and him together will go through, let’s say, four days worth of training camp, and that’s very much tailored to what the next race is and what the demands are of that next race. That could involve anything from obviously some basic cardio sessions, such as running, karting, boxing, squash, strength sessions as well, which we’ll mostly focus on shoulders, neck, the glutes, the core muscles. So a bit of everything.

I would say those are the main sessions, and normally we’ll do a massage, probably on Monday or Tuesday after the race weekend to help reset the body and recover from the weekend just gone.

Without my assistance… It would be a nightmare! He’d forget his wallet everywhere, his phone would be left on its own, he’d have to figure out how to put an umbrella up and things like that! He’d have to fill his own drinks bottle, which wouldn’t happen… 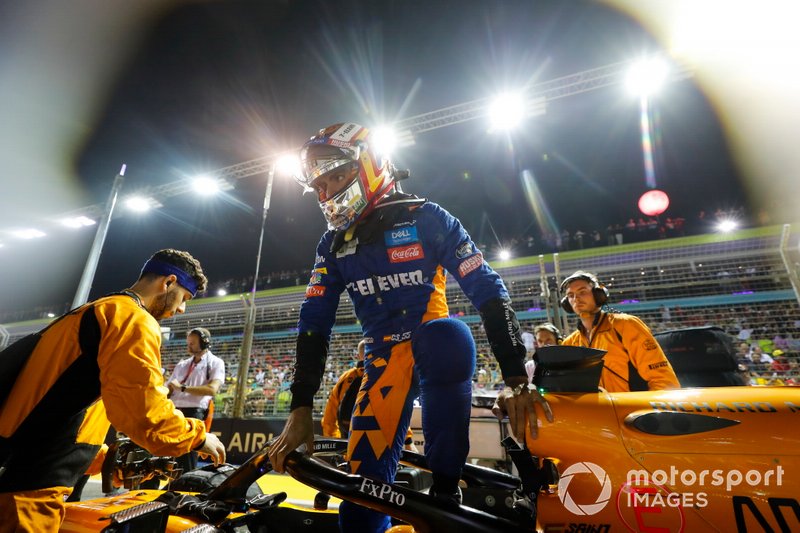 Jokes aside, I’m sure there would be a period of initial stress for him, but he’d find a way to get around it. But I hope he sees value in our relationship and what I provide, and he prefers me being around.

Formula 1 is one of the most unique sports. It has a huge number of factors, some of which you can control and a lot of which you can’t control. This can make the sport very frustrating when certain things go wrong, as something might break on the car, for example, but when it all comes together it can also make it one of the most exciting and rewarding sports that I’ve ever worked in. And I think the marriage you have between the extreme kind of mechanical, engineering element and human skill level at its finest makes for quite an amazing and fascinating sport.