NASCAR champion Jimmie Johnson has entered somewhat uncharted territory. For the first time since the dawn of the 21st Century the now former fulltime Cup driver isn’t getting ready for a new season. At least not in NASCAR.

Johnson completed his final season as a full time Cup driver last November and entered his first offseason without having to worry about racing 36 Cup races in 2021 and battling for a championship. Instead, his focus turns to a new chapter in his life and racing career. The 45-year-old is preparing for new races, in different cars, and on different tracks. He will race in the IndyCar series on road courses for Chip Ganassi Racing this season.

Before that however, Johnson has another task at hand.

For only the second time in his long career, Johnson will be racing in the IMSA Rolex 24 at Daytona International Speedway. His last run came 10 years ago when he raced in the Grand Am DP class. This year sees him in the No. 48 Ally Cadillac DPI VR with a star-studded lineup of co-drivers Simon Pagenaud, Mike Rockefeller and Kamui Kobayashi. Johnson took his first laps in the car around Daytona’s road course Friday as the series tests in preparation for next week’s race. 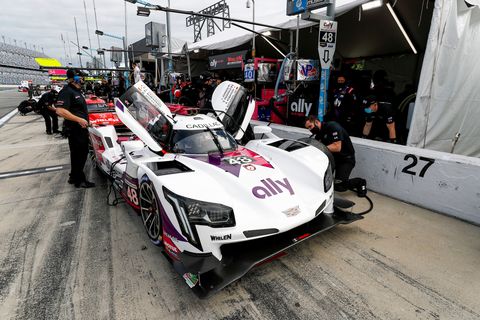 “I feel like we’re in a really good place, extremely well-prepared from the mechanical side and from the car side,” Johnson said. “We’re right where we need to be. But things have changed quite a bit since I have been down here for this test session. The biggest thing is the lack of track time. Before we’d come down and run for hours and hours and hours and the drivers could rotate through and really get comfortable with the car and understand and really go to work on ourselves, and how to drive the car.

“This is far different; Kamui’s only been in the car once so far. I’m probably the one with the least amount of experience so I’m getting more reps in the car at this point just to try to help with my comfort and confidence in the car. I’m out there having a ton of fun, but certainly trying to make each lap count because they are so limited in trying to get to learn as much as I can personally out there.”

While the cars and the racing might be different than what he’s used to, Johnson does have familiar faces on the team. Mainly Chad Knaus, the crew chief Johnson won seven Cup titles with. Knaus is at Daytona for this weekend’s test session and will be here for the Rolex 24 next weekend.

“He’s ingrained in the team,” Johnson said. “He’s assisting Ian Watt on the engineering side and we do have some Hendrick Motorsports crew members here that are going to assist with tire changes and going over the wall and working on the car and stuff. It’s been great to work with them and he’s been involved. I just left the transporter where my teammates and I were digging into the driver data and Chad’s running the computer helping us find our way through and find the right settings to look at for driver data. So, he’s definitely ingrained in the team.” 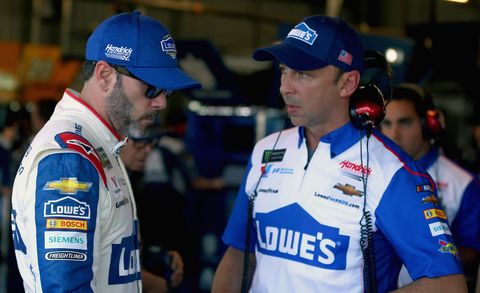 “It’s awesome,” Johnson said. “Theres nothing weird about it. And it’s very meaningful to me. And I know it is to him to be back working together and it’s been awesome, I am really really excited about it.”

Johnson had no hesitation when asked if he was excited for the season to get started. However, that excitement comes with a bit of a caveat.

“I would say with that excitement comes some anxiety as well,” he said chuckling. “You know, I’m jumping into the deep end of the pool. If it’s this weekend’s race with stacked field not only just the stacked car that I’m fortunate to drive with the stacked field here for the Rolex 24 and then jumping into the Indy car and just how special the technique is in those cars and the amount of aggression to drive those cars. I mean at Sebring it’s long runs and I just couldn’t believe the intensity you could bring every corner every lap. So, within that is a ton of fun as a driver just from a pure experience standpoint in the car. It’s out of this world and then even driving this car is that way and I’m truly enjoying that but the competitor in me; I want to be in the mix, but I just need to be realistic about things and start building my laps and seat time and continue to close the gap.” 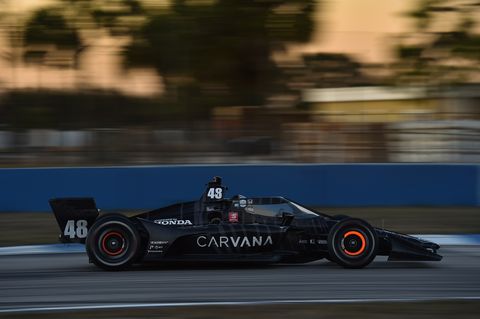 Instead of getting ready for a new season in NASCAR, for the first time in over two decades, Johnson has had quite a different offseason.

“Well, I would say has been the busiest offseason I’ve ever had,” Johnson said. “I was in an IndyCar immediately following the season finale for NASCAR in the IndyCar team with CGR, the F3 team. And then this prototype there’s SIM for the IndyCar and the Prototype, they’re seats to be fitted and made for all three cars, learning crew members, teams, systems, meetings. It’s been by far the busiest winter, (Wife) Chani and I joke all the time and here we thought I was slowing down, and it’s been way busier than Ive ever experienced from a standard November to January. “

The last time Johnson raced in the Rolex 24, he finished 12th. This time with a strong lineup of experienced drivers with him, and a top team, Johnson could just add Rolex 24 winner to his resume. Should he pull it off, he might have to decide if his wife will get the Rolex watch that comes with the trophy or if he will keep it for himself.

“I look forward to figuring that out,” he said with a smile.

How will Jimmie Johnson do in the Rolex 24 and in the IndyCar series this season? Answer below.