Coming off the most difficult season in IndyCar racing’s 109-year history, due almost exclusively to the trials and tribulations of the COVID-19 pandemic, a sense of normalcy—or as near as normal as can be hoped for—has taken shape for the series.

“We’re really excited about 2021,” NTT IndyCar Series president Jay Frye told Autoweek. “We’re all getting antsy right now. You know, there’s a lot of motorsports going on around us and we’re not on track yet. So, that’s been frustrating.

“But when we launch at Barber, we feel good about the first three weeks (Barber, St. Petersburg on April 25 and doubleheader weekend at Texas on May 1-2) … and then going into the month of May in Indianapolis with the GMR Grand Prix and the Indianapolis 500.

“We have new teams, new ownership coming in, car counts are higher for the 2021 season, which is a good thing. Coming off a pandemic and the next season your car counts are still going up, and the 500 car count is going to be very solid. So we feel really good about 2021.”

So many lessons were learned by the sanctioning body and its teams during the shortened 2020 season due to the pandemic. Most notable were lessons learned about fewer or shorter practice sessions, shorter weekends and a greater focus on how to make things more cost-effective for the series, its teams, sponsors and race promoters.

“A lot of the efficiencies that we learned in 2020, we’re going to apply some of them to this season,” said Frye, now in his sixth year as IndyCar president. “There were a lot of good things I think at the end of the day that came out of it, a lot of learning of how to do things differently, a lot of how we banded together as a series to get things done.

“We think practice and qualifying is important, (but) based off what we learned last year, being more efficient, we have trimmed it up. So instead of having three practices (in a weekend), we might have two. Or instead of four, we might have three.

“So we think it’s still important to put on a weekend for the fans. But again, I think if we trim it up a little bit, become more efficient, we can save everybody some (costs). Economics matter.

“(Shorter weekends) can save some for the promoters. Where before we might not have ran as much on Saturday, we might have run some on Friday, but Saturday is a big, big day now.”

Frye and everyone in IndyCar saw so many races scheduled, canceled, rescheduled and moved to other venues last season, sometimes with only a day or two notice. It forced the sanctioning body to go into a race week with several game plans.

“We’re in the motorsports world, we’re creatures of habit,” Frye said. “We’d go on a race weekend (last year) and then something might happen. So we were very out of our element in the way we were operating and what we were doing.

“But part of that was good. We learned a lot, a lot of ways to do things more efficiently. But there were times (we’d leave) on Tuesday or Wednesday—and we were supposed to load in (at-track) on Thursday or Friday of a race weekend—and it was still questionable whether it was going to happen or not.”

Frye is a veteran motorsports executive, first in NASCAR and since 2013 with IndyCar. He’s seen so much in nearly 30 years that little could surprise him. That is until last season. Then, just like his counterparts in IndyCar as well as NASCAR, NHRA, Formula 1 and others, Frye not only had a number of sleepless nights, he had some downright stranger-than-fiction days.

None was more eerie than holding the Indy 500 not on Memorial Day weekend. Not having fans sitting in Indianapolis Motor Speedway’s massive grandstands (normal capacity 300,000-plus) made like a twilight zone effect.

“It was extremely strange,” Frye said. “Last year was kind of like a blur. Even in like August, when we had the 500. Normally, you always thought about the Monday after (the 500) being a holiday. Well, Monday in August wasn’t a holiday. We didn’t have the big victory celebration.

“The weirdest part about the whole 500 piece was when we started the race and there was nobody here. I mean, that’s hard to describe, because as you know, it’s hard to describe the feeling of the Indianapolis 500 when it’s packed with 300,000 people, the patriotism, how the how the event kicks off, right?

“Well, just imagine that when nobody’s there. It only made the year all the more stranger.

“Well, obviously, if there’s anybody who can get something like that done, it’s Roger Penske,” Frye said with a broad smile on his face. “If Roger starts talking like that, that’s obviously a great sign for all of us. Every day it seems better.”

Here’s what you need to know heading into this weekend’s season opener:

ALL HAIL THE RETURNING KING

If he can repeat as champion in 2021, Dixon would tie the legendary A.J. Foyt for most season championships (seven) in IndyCar annals.

There’s also an irony of sorts: Dixon has never won back-to-back titles in his IndyCar career. The closest to that milestone was championships in 2013 and 2015, sandwiched around a third-place finish in 2014. He also won titles in 2018 and 2020, but was fourth in 2019.

ROOKIES IN NAME ONLY

Three of the biggest names in other forms of racing will be considered IndyCar rookies this season:

• Jimmie Johnson, who is tied with NASCAR Hall of Famers Richard Petty and the late Dale Earnhardt for most Cup championships in a career (seven each), will compete in 13 of this season’s 17 races, all on either street course or road course layouts. He will not compete on any of the four oval races on the schedule, including the Indianapolis 500 (veteran IndyCar driver Tony Kanaan will fill in for Johnson on ovals). 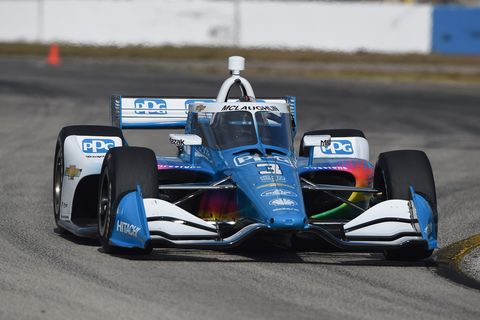 • Scott McLaughlin, who won the last three Australian Supercars championships (plus was runner-up in 2017), follows in the footsteps of fellow Australian Will Power and neighboring New Zealander Scott Dixon to race in IndyCar this season. He will compete for Team Penske, which returns to a full four-team IndyCar operation for the first time since 2017.

• After zero wins and just 10 podiums in 179 races over 10 seasons on the Formula One circuit, many thought Romain Grosjean would never race again after a horrific crash at Bahrain in the 15th of 17 F1 races last season. But Grosjean has healed from his injuries, particularly severe burns to his hands, and moves to American open-wheel racing. Grosjean, who turns 35 on Saturday, will compete in 13 road and street course races for Dale Coyne Racing with Rick Ware Racing.

Like Johnson, Grosjean will not compete in IndyCar’s four oval track races, including the Indy 500. Pietro Fittipaldi will drive for Grosjean in the two races at Texas, the Indy 500 and at Gateway near St. Louis.

Grosjean is the most recent F1 driver to switch to IndyCar, joining a team that other F1 alums such as the late Justin Wilson, Sebastien Bourdais and Pietro Fittipaldi have raced for.

“A three-time supercar champion, a Formula 1 driver and a seven-time Cup champ, those are your three rookies for the season,” Frye said. “It’s going to be fun to watch them. All three are pros, all really good people. And I think they’ll enhance the series in a big way.”

This season will see the return of several drivers to the paddock:

* Kanaan, who many assumed his career was over after not being renewed by A.J. Foyt Racing after last season, returns to Chip Ganassi Racing (who he formerly competed for from 2014-2017) for the four oval races that Johnson will not compete in.

* Helio Castroneves, who spent the last three seasons racing full-time in IMSA (as well as nine scattered IndyCar starts during that same time frame), will compete in six races this season for Meyer Shenk Racing.

* Juan Pablo Montoya, who last drove an Indy car in the 2017 Indianapolis 500, returns to Indy in search of his third win in The Greatest Spectacle In Racing, as well as competing in August’s Indy Grand Prix for Arrow McLaren SP.

* Also, Ed Jones returns to Dale Coyne Racing with Vasser-Sullivan for the full season (Jones previously raced for DCR in 2017).

WHERE ARE WE RACING THIS WEEKEND?

The 2021 season has already had several glitches due primarily to COVID logistics and conditions, even before the first green flag has fallen.

The traditional season-opening race at St. Petersburg, Florida, has been pushed back to next weekend and becomes the second event of the scheduled 17-race campaign.

What’s more, the new season opener, this weekend at Barber Motorsports Park, was initially slated to take place last weekend, but was pushed back an extra week to kick off three straight weekends of racing (Barber, St. Pete and Texas).

After missing last season due to the pandemic, Long Beach returns to the schedule. But once again due to the virus, the race was rescheduled from this weekend until September 26, which will mark the final race of the planned 17-race schedule in just over five months’ time. And just like the start of this season, with three consecutive races in as many weekends, the season will end with three straight races at Portland (September 12), Laguna Seca (Sept. 19) and Long Beach (Sept. 26).

Three other tracks that were originally on the 2020 schedule before COVID derailed those plans, will not hold events this season: Circuit of the Americas in Austin, Texas (which saw its first IndyCar event won in 2019 by Colton Herta), Richmond Raceway (which has not hosted an IndyCar event since 2009), and Iowa Speedway.

But if COVID returns with a vengeance, don’t rule out more schedule changes or potentially yet another compressed schedule like last season’s 14 races instead of the originally scheduled 17 events.

One BIG return to normalcy, pandemic permitting, is the return of the Indy 500 to its traditional Memorial Day weekend race date. For the first time in its 109-year history, last year’s race was pushed back from late May until August 23. And to add insult to injury, fans were not allowed to attend the rescheduled event.

That’s not expected to be the case this season. Indianapolis Motor Speedway officials are planning on having as many as 250,000 fans in attendance for this year’s race, marking the largest sporting event crowd in the world since the pandemic began early last year.

Another significant return to normalcy is the annual two-race Detroit Grand Prix at Belle Isle in Detroit (June 12-13), which was among those events cancelled last year due to the pandemic.

The U.S.-Canada border remains closed through at least next month, putting the status of the Honda Indy Toronto (July 11) uncertain at best. If Canada continues to keep its border closed, it’s uncertain whether IndyCar will try to reschedule that event later in the year, at another location within U.S. borders, or if it will be completely struck from the schedule.

And if California doesn’t soon lift its ban on large crowds at sporting events, Frye and IndyCar may find themselves almost with a sense of déjà vu for both Laguna Seca and Long Beach.

Still, things are certainly starting off a lot better than they did last season. Let’s just hope it stays that way.