Valtteri Bottas has sealed his future—and it isn’t with Mercedes.

The reigning World Champions have plucked George Russell 2022, in a decision the team has has to make public but which is hardly secret.

Bottas, 32, has found employment at the Sauber-run Alfa Romeo team, in place of compatriot Kimi Räikkönen, who is retiring.

The official announcement was made by the Switzerland-based team on Monday, ahead of this weekend’s Italian Grand Prix. That news paves the way for Russell to join Mercedes.

Bottas will relinquish a title-winning Formula 1 car after five years and is likely to have to lower his expectations. He has scored nine wins, 17 poles, and 63 podiums in 170 grands prix, the bulk of that success with Mercedes following four prior years at Williams, but is joining a customer team that enjoys fewer resources and more modest ambitions.

Alfa Romeo has scored only three points in 2021 and is ninth in the standings. It last finished higher than eighth in 2013, with its most recent podium coming in 2012. While the 2022 rules reset does present Alfa Romeo with an opportunity to improve its prospects, it is unlikely to be a front-runner.

Taking on Bottas—an experienced race winner with firsthand insight of the most dominant Formula 1 team in history—is a boost to Alfa Romeo’s prospects. After all, being slightly slower than Lewis Hamilton, who has seven titles, 99 wins, and 101 pole positions, still makes Bottas a very good driver. There was a reason Mercedes signed him and kept him for five years, as it appreciated his speed, apolitical approach, and his loyalty. Mercedes and Hamilton, have won the title in each season since Bottas joined. The decision not to retain him for 2022 was far from simple.

“This hasn’t been an easy process or a straightforward decision for us,” said Mercedes team boss Toto Wolff. “Valtteri has done a fantastic job over the past five seasons and he has made an essential contribution to our success and to our growth.

“Together with Lewis, he has built a benchmark partnership between two teammates in the sport, and that has been a valuable weapon in our championship battles and pushed us to achieve unprecedented success. He would absolutely have deserved to stay with the team, and I am pleased that he has been able to choose an exciting challenge with Alfa next year.” 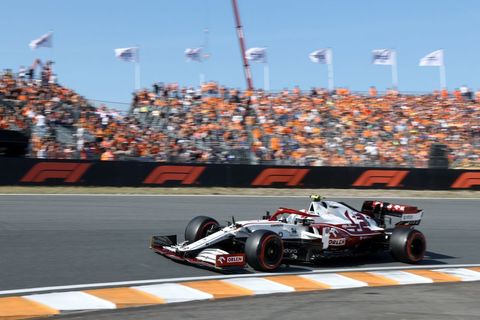 Bottas can now move out of the shadows and enjoy being a team’s focal point. Those attributes that made him an asset for Mercedes for half a decade can be exploited at Alfa Romeo.

“We bring to Hinwil (Switzerland) a strong team player with experience at the sharp end of the grid,” said Alfa Romeo team boss Frederic Vasseur, who previously worked with Bottas during the Finn’s time in junior categories Formula 3 and GP3. “Valtteri has been an integral part of a team that rewrote the history books and he has four constructors’ world titles to his name: He is the right driver to help Alfa Romeo make a step forward towards the front of the grid.”

It is a multi-year deal for Bottas, something which he has never before had in Formula 1. He had previously outlined that such long-term stability was a desirable factor when evaluating his future.

“The potential of the setup in Hinwil is clear and I am relishing the opportunity to help lead the team forward up the grid, especially with the new regulations in 2022 giving the team a chance to make a leap in performance,” said Bottas. “I’m grateful for the trust the team has put in me and I cannot wait to repay their faith: I’m as hungry as ever to race for results and, when the time comes, for wins.”

Confirmation of Bottas’ move to Alfa Romeo clears the route for 23-year-old Russell to join Mercedes, with official communication expected shortly. Russell’s exit from Williams thus frees up a seat at that team, with ex-Red Bull racer Alexander Albon among the front-runners.

Alfa Romeo has not yet determined the identity of Bottas’ teammate, with several drivers, including current racer Antonio Giovinazzi, believed to be under consideration.