It was an IndyCar press conference at Gateway in 2019 when Santino Ferrucci was asked if he had any regrets over how his controversial Formula 2 stint had ended.

This, obviously, did little to assuage a fan base that had already made up its mind that Ferrucci was fit to serve as this generation’s Paul Tracy — chief antagonist of the IndyCar Series paddock.

“That was the worst possible answer I could have given you,” a more measured Ferrucci said in January during a free day in advance of the Chili Bowl Midget Nationals.

Ferrucci spent the past three years emerging as one of the discipline’s brightest young stars. He captured Indianapolis 500 Rookie of the Year honors in 2019 after a seventh-place finish. He recorded his best overall result a month later with a fourth place at Texas Motor Speedway.

He matched that result this past August in his second attempt at the Greatest Spectacle in Racing.

But through it all, he couldn’t escape the constant reminders that he had crashed teammate Arjun Maini during a cool-down lap at Silverstone and subsequently ignored an FIA directive to attend a hearing over the matter.

There were other issues, too.

Those incidents cost him both his seat with the Trident Formula 2 team and his place as a Haas F1 development driver, leading both to his return to the United States and the beginning of an IndyCar career.

It didn’t help his popularity much that Townsend Bell and Tracy himself were so over-the-top complimentary of the young driver on TV each week — endorsing Ferrucci at the virtual expense of nearly everyone else on the grid.

It was not that Ferrucci was entirely undeserving of the praise, as much as fans never getting the opportunity to reach their own conclusions in the face of what they viewed as agitprop from the broadcast booth.

To his credit, Ferrucci had no such behavioral issues in IndyCar, and was an incredibly consistent driver who never tore up equipment while matching the legendary Sebastien Bourdais in 2019 at Dale Coyne Racing.

To the point of Tracy and Bell, as excessive as it might have come across, Ferrucci accounted himself well in IndyCar over the past two seasons.

So, there were absolutely times where Ferrucci wishes he was better understood.

“Obviously, I’m never going to be able to change what happened,” Ferrucci said. “I’m going to live with it for the rest of my career. That was a mistake that I have owned up to. I own it.

“I’ve tried to be myself here, and I’m really comfortable being myself, showing my true colors and who I am as a racer … We completed every race but one since 2019, pretty much all the laps. It’s just this perception and it is what it is.

“I’ve somewhat embraced it because there aren’t a lot of black hat style racers anymore and I’m okay with being that if it comes down to it.”

Ferrucci will have an opportunity for a fresh start this spring with a new fan base after deciding to pursue NASCAR during the off-season.

After mulling several offers to remain in IndyCar, the 22-year-old has decided to enter 20 races in the NASCAR Xfinity Series with Toyota Racing Development and Sam Hunt Racing starting February 27 at Homestead-Miami Speedway.

“I’ve been looking to do this for a while,” Ferrucci said. “I knew that I wanted to end up there someday. It’s what I’ve always wanted to do at some point of my career, maybe when I was 30 or 32 and not 22.

“I’m thankful it’s happening now for two reasons, though: It’s harder to find a manufacturer unless you’re a truly well-established driver and it’s harder to break habits once you’re older.”

While exploring his options, Ferrucci was able to connect with seven-time NASCAR Cup Series champion Jimmie Johnson, who is going to the other way this off-season, from Cup to IndyCar.

“I knew him in passing,” Johnson said, “and through some mutual friends, understood he was heading to North Carolina.

“I wasn’t there. I don’t remember where I was, probably driving a F3 car somewhere, but I was able to chat with him and understood his decision and the opportunities he had in front of him. I was like, I know some people that helped me in a similar place in my career.”

Chief amongst them was Lorin Ranier, the son of legendary team owner Harry Ranier and a veteran of nearly every job there is to do in motorsports.

“Lorin was someone that helped me in a similar place and someone who is very good at developing young drivers,” Johnson said. “I’ve sent four or five friends to him early in their careers because he has a magic touch for developing drivers.

“It seemed like a great introduction. Lorin has a great network of people, cars and teams and I think Santino found a great fit.”

It was Ranier that connected Ferrucci to Sam Hunt, a 28-year-old driver turned owner, who was looking to take his Virginia based team to the next level in 2021. Hunt launched the team following a conversation with the late JD Gibbs and has maintained close ties to Joe Gibbs Racing. The team will have Gibbs and TRD support this season. 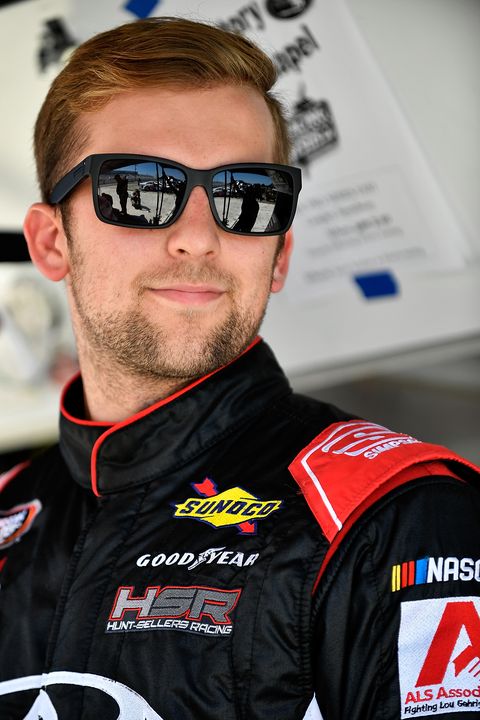 Hunt believes he and Ferrucci are at similar points in their respective paths — making the pairing a natural fit.

“We organically hit it off and started this professional relationship without a lot of effort,” Hunt said. “He’s still learning how this garage works, and his budget is still limited, but we’re close in age.

“So, spending a weekend with him and just him seeing what we have and don’t have, but what I’m building towards, my vision. I feel like it matched up to how he wants to operate.

“By the end of that weekend, it was like, no question, I want to do this with Sam.”

The extent of his stock car experience was a Super Late Model test at Caraway Speedway near Asheboro, North Carolina on December 21. Complicating matters is that Ferrucci will not be able to turn a single lap of practice all season due to NASCAR’s continued COVID-19 response procedures.

As a result, the Toyota Racing Development simulator in North Carolina has become his best friend as he prepares for this new endeavor.

“I’m trying to go into this like a completely green, brand new, zero habits driver,” Ferrucci said. “You know, the only thing that I want to take into Xfinity is my race craft from IndyCar in that I’m an aggressive driver who likes a loose race car.”

“You get a lot of mixed opinions from fans, but I have to look at it as getting one race with a pit stop, another race a pit stop, and by the third race, I should have it figured out. I should be able to dig my heels in and go race.”

Both Ferrucci and Hunt believe the car is capable of running inside the top-10, but it’s a matter of how quickly the IndyCar convert adapts.

“Joe Gibbs Racing is a huge help for us,” Ferrucci said. “They’re helping us with set-ups, cars, motors and the simulator engineering. They are really, really trying to push Sam and I to produce something of a level that can compete with Gibbs, Stewart-Haas, Penske and all the top contenders. That’s where they want to see us.

“That’s where I want to be at … and I’m sure we’ll be very capable of being in the top-10 once I get my driving figured out.”

But that’s easier said than done, of course. When Ferrucci first read stories about his impeding arrival, he didn’t even understand why people kept calling the mile and a half tracks they had selected ‘intermediates.’

“I was like, ‘what in the heck is an intermediate,’ when I read that,” Ferrucci said. “We chose those tracks because they were the most important on the schedule, the hardest to learn race craft or the strategy.

“We felt like it wouldn’t do us much good to race on the road courses because I mostly feel comfortable with that since it’s my background. So, everything we’re doing is about proving myself to the Cup grid and proving that I’m capable of doing it.”

Hunt has reasonable expectations, too.

“Our goal for Homestead is to just run the entire race, and get him as much laps possible,” Hunt said. “We would love to run inside the top-15 or as high up as possible, but he just has to learn the race craft of these cars, and that’s going to be even more challenging without practice.

“He has to learn to feel the right side of his car and where his front bumper is, because you can’t see it like you can with an open-wheel car. Learning how the air works is huge. It’s not going to turn like an Indy Car — all the elementary things.

“I told him, whether we run 10th or 30th, we just need to run the entire race at Homestead, and we’ll pick up from there.”

Even though Ferrucci declined opportunities to race full-time in IndyCar, he is still hopeful to make his third consecutive start in the Indianapolis 500 this year, hoping to build on two consecutive top-10 finishes.

“Those conversations will come a little bit later down the road,” Ferrucci said. “I know that there are a couple of teams that are going to look for a good 500 driver on a third car.

“I’m looking to get into someone’s primary car that doesn’t have a driver for the ovals like Jimmie Johnson, but trust me, I definitely tried that route. I would have loved to share that seat with him.

“But definitely something like what Tony (Kanaan) put together, but I really want to be in good equipment and not someone’s afterthought car, because I know I have a chance to win that race.”

All told, the 2021 season is a fresh start for Ferrucci.

This is ultimately what he plans to do for the rest of his career, and he hopes to make an impact, one not dictated by his previous actions but what happens moving forward.

“It’s weird because I made such an effort in the IndyCar paddock for people to get to know me and understand my story,” Ferrucci said. “That was just three years ago and I’m about to have to do it again in NASCAR.

“But I’m excited to do it because they have this incredible platform to showcase their drivers, and what I’m about. I’m excited for fans to come back to do proper meet and greets. That’s the heart of what this sport is about.”